“In a way, I wanted to join the police to redress the karmic imbalance in the world caused by my husband’s views.”

Barnbrook has also been in the News of the World this week for two-timing his ballerina fiance with a nurse from Finland. I have to admit I am rather disappointed that NotW failed to use the headlines “a kick in the Balkans” or “Finns ain’t what they used to be”.

Possibly the most disappointing thing about the state of British fascism (apart from, of course, the fact that they are racist, violent thugs who are improbably gaining electoral support at the moment), is their sartorial inelegance. Oswald Mosley may have dressed his blackshirts up like Doctor Who villains, but at least they knew what a fucking iron was. 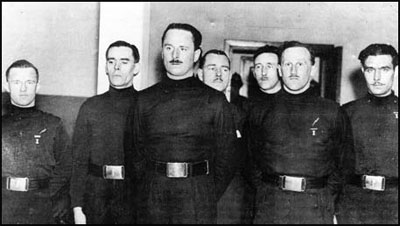 One thing you can say about Barnbrook is that with his brown suit and already suggestive fringe, at least he makes it easy for people to caricature him.

Frankly though, I prefer these fellers. 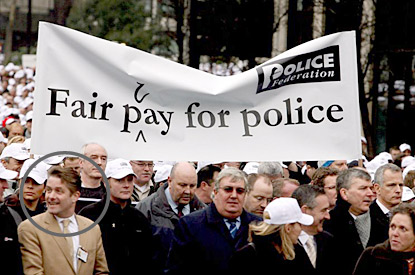 Or, to put it another way:

â€œWe didnâ€™t ask him to leave because whether we like it or not we live in a democracy.â€

And while we are continuing police inquiries, what do we know following their famous march on London? The event itself was peaceful; the least we could expect, but why was Richard Barnbrook, the BNP mayoral candidate for London and “visionary artist” allowed to take a prominent place at the front? Many forces ban their officers from membership of the BNP, as does the Association of Chief Police Officers. Brian Paddick, the Liberal Democrat candidate and former deputy assistant commissioner at the Met, raised the issue with the organisers, who proceeded – in an orderly fashion – to do nothing. Yesterday BNPtv posted its lengthy footage of Barnbrook interviewing a federation official from Essex police. The disreputable in league with the disgruntled. Hard to know which is worse.

You can watch the film on YouTube. Barnbrook can clearly be seen at the front of the demonstration along with the police’s other high profile supporters (including Susan Kramer, although she seems to have put as much distance between him and her as possible) while the Secretary of the Essex Police Federation Roy Scane (and there is no way a policeman with such a role could possibly not know who Barnbrook is) happily gives Barnbrook an extended interview.

This is of course exactly the kind of tacit approval that the BNP crave. Is the Police Federation nuts?

UPDATE: The Evening Standard has more on this. How about this for a pathetic/vaguely sinister excuse from the Police Federation:

“Some of my colleagues saw we had the BNP Mayoral candidate with us. The one thing we want to make clear is we didn’t invite him. It wasn’t a closed march. He chose to attend by his own accord which is his right in a democracy. It is disappointing if anyone chose to join the march for their own agenda.

“We didn’t ask him to leave because whether we like it or not we live in a democracy.”

In a democracy you certainly can refuse to allow an individual to lead a public demonstration from the front. You simply ask him to leave. I somehow doubt even the BNP would be uncooperative with a crowd of 22,000 coppers. And you are certainly not required to provide him with a friendly interview with one of your regional officials.

And what’s with this ambivalence about living in a democracy? Are they on a mission to lose public sympathy?