Apparently, cocaine users are “getting younger“.

Plus, it’s cheaper and more plentiful than Boots’ No7 Protect & Perfect Beauty Serum.

I will simply note Jeremy Hargreaves‘ and Paul Walters‘ recent articles on Ming’s opposition to holding a referendum for now as I don’t have time to fillet them at the mo.

Meanwhile however, via Direct Democracy, I note that the Lib Dems’ sister party in Australia – the Democrats – are calling for citizen-initiated referendums at the moment. Senator Andrew Murray writes:

While recognising that Australia is a representative democracy and supporting what that entails, I support direct democracy in defined circumstances because it promotes popular engagement with the political process on questions of public importance, particularly in matters that affect people immediately and specifically.

Increasingly we need to recognise that local people are best served when they are able to determine what happens in their own backyard, whether it is the placement of a pulp mill, the location of a nuclear power plant, or the amalgamation of their local council with another.

Embarrassingly for us, he goes on to quote David Cameron approvingly, as if he is the leading the vanguard of democratic reform in the UK. In truth, even the relatively radical Direct Democracy group are fairly cautious when it comes to citizen initiated referendums, and Cameron doesn’t even go that far. The fact that he finds common cause with Cameron is partly to embarrass Cameron’s fellow (small-c) conservative John Howard, but its is nonetheless embarrassing (for me, at least) that the Lib Dems are unable to say to them “us too!”

Another in my occasional series about the BBC (which may well have been corrected by the time you read this): 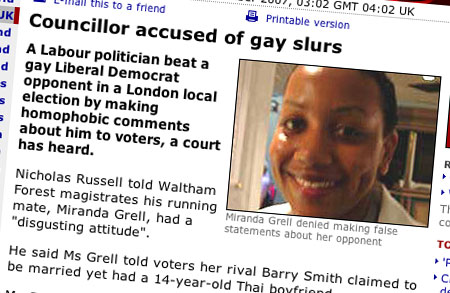 Now, innocent until you’re proven guilty on all that: I’m not commenting on the case itself. But since when does accusing someone of paedophilia count as a “gay slur”? If a straight man was accused of paedophilia, would the BBC call it a “hetero slur”?

Add to My Profile | More Videos
You can forget Tom and Jerry. For me, the best cartoon double act of all time is Bugs and Daffy.

The thing is, I’ve always had a soft spot for the underdogduck. It’s not that I have anything against transvestites you understand, but I always found Bugs to be unbearably smug and utterly cynical, appealing to Elmer’s worst nature.

Daffy on the other hand, despite always ending up on the business end of a shotgun, has a sort of everymanfauna appeal. Sure, he loses his temper every once and a while. Sure, you always know he’s onto a loser. Sure, he can be a conniving little sod at times. And yes, he is often the agent of his own downfall. But you can’t help but sympathise with the guy.

Why am I mentioning all this on a blog post about the EU referendum? Well, because those classic Bugs-Daffy-Fudd cartoons remind me a lot of the level of debate surrounding the EU. Elmer is the voter, Bugs is the Eurosceptics and Daffy is the Europhiles. Depressingly, Bugs always gets the better of Daffy. Daffy meanwhile never seems to realise he’s onto a loser playing Bugs’ game and never changes tac (except for when he tries to be clever and ends up being hoist on his own petard). All too often, the debate degenerates into the equivalent of “Rabbit season! Duck season! Rabbit season! Duck season!” At no point does Daffy sit Elmer (who is a vegetarian for God’s sake!) down and attempt to reason with him. No wonder the voter often ends up losing his rag and gunning for both sides of the debate.

Sadly for the Lib Dems, Ming Campbell has now done the equivalent of wearing a Daffy-style “shoot me now!” sign. In an interview with the FT, he’s leapt to Gordon Brown’s defence arguing that a referendum on the EU Reforming Treaty is “not necessary“:

Lib Dem support for a poll could even have threatened Mr Brownâ€™s Commons majority on the issue and piled on the pressure for a vote that many believe the prime minister would lose.

But Sir Menzies, a â€œpro-Europeanâ€, told the Financial Times the new EU reform treaty was â€œsufficiently differentâ€ from the original constitution to avoid the need for a plebiscite. He said the only case for a public vote would be on a much broader â€œin or outâ€ question about Britainâ€™s membership of the EU, to prompt a serious national debate on Europe.

However, such a question is unlikely to be put by any government in the near future. â€œMy judgment is a referendum is not necessary on this document,â€ he said in an interview ahead of next weekâ€™s Liberal Democrat conference in Brighton. â€œBut if we were to have a referendum, then it is worth considering a more fundamental referendum, in a sense of being in or out.â€

A formal decision on the partyâ€™s position will be taken after Mr Brown signs a final treaty text at an EU summit in Lisbon next month, but few believe it will differ greatly from the draft agreed in Brussels in June.

What depresses me most about this statement is that he has chosen to parrot the government line that the reforming treaty is “sufficiently different” from the constitutional treaty to not warrant a referendum. Stung by sneering about “if it looks like a duck and quacks like a duck…” from the sceptics, many pro-Europeans have adopted the tactic of giving the treaty rabbit ears and pretending it is of another genus completely.

Europhiles could go around calling the sceptics’ bluff, pointing out that we already have a constitution which by opposing this reform, they in effect support. Instead, they seem to be dedicated to playing the sceptics game. I don’t understand it.

What’s worse, exactly the same thing happened in the 90s. The Eurosceptics started muttering darkly about “federalism” and the Europhiles promptly started denying that they had any federalist leanings; you could be forgiven for thinking they misheard “pederast”. Federalism is a perfectly sensible system of government. So sensible in fact that the self-same Little Englanders who purport to hate it so much at an EU level are now demanding a federal UK (of course, they want a woefully lopsided federation, but that is for another debate). Federalism in an EU context means, among other things, a way of finally reforming dreadful inter-governmental nonsenses such as the Common Agricultural Policy and the Common Fisheries Policy. Eurosceptics like to emphasise how much they hate such things, yet seem to hate even more the prospect of reforming them.

Another example of the sceptics nonsense: they constantly go on about the EU undermining Parliamentary sovereignty, yet they demand a referendum. Fact: referendums undermine Parliamentary sovereignty. If our Parliamentary system is so perfect, how come it has lead to this situation occurring? They manage to simultaneously despise the government and call for it to be trusted to look after our best interests. They claim to defend democracy while insisting our voices should be drowned out by governments at a trans-national level.

As has so often been pointed out, with the exception of Euronihilists such as UKIP they have no Plan C. They don’t offer any solution for what the EU should do if this reforming treaty were to fall. They don’t have a meaningful contribution to make at all.

So why have they been allowed to dominate the public debate for so long? Simple: pure cowardice on the part of the pro European movement. Stung by the disastrous debacle that was Britain in Europe which, among other things, lead to the virtual demise of the European Movement (the organisation), they have become utterly petrified of calling the sceptics’ bluff. They have come to regard the public as the mob – a dangerous rabble that politicians need to protect “us” from. In fairness to them, we are to understand that they have launched a “Coalition for the Reform Treaty” but they are so disdainful of the public that they haven’t even bothered with a website.

People like Andrew Duff are quick to point out the complexity of the treaty and how impossible it would be for the general public to deliberate on it. Surely, if it cannot be explained in layman’s terms, it is pretty much indefensible? Indeed, don’t we expect the public to deliberate between party manifestos? What’s simple about that? In any case, what magical qualities do our MPs have that enables them to make the decision on our behalf?

One of my favourite anecdotes is that in the run up to the Danish referendum on the Maastricht Treaty, a research company did a poll which revealed that the average member of the public knew more about the content of the treaty than the typical non-specialist MP. Give people a say and, generally speaking, they take the trouble to inform themselves.

In a sense, Ming is correct: it may well be more useful and meaningful to have a referendum on EU membership than on this reforming treaty and if that is what he had called for yesterday, I wouldn’t have a problem. But even here he hedged his bets.

My own view is that while a referendum on EU membership may be preferable (although Jonathan Calder makes some interesting arguments against), it won’t fly. That being the case, given the choice between a referendum on the treaty and no referendum at all, I say go for the referendum. From my perspective there is no down side: either the public approves the treaty, or it doesn’t. If you’re a democrat and a Europhile there is a Plan C: the sort of meaningful public debate we were promised when the constitutional treaty was first mooted and never got (maybe then George Monbiot can get his wish). From a tactical Lib Dem position it is a no-brainer as well: either Brown will hold firm and we can be holier than thou, or he’ll capitulate and we’ll look like we forced him into it.

Either way, the bottom line must be that if the European project is to be sustainable, it is crucial that the political class carries the public along with it. Every time they pretend they can bypass the public on this, they cause long term damage and further alienation. Treat the public like children and they will behave like children. Treat them with respect and they may just start listening to you. Ultimately, as I wrote on Lib Dem Voice on Sunday, you are either “drawbridge up” or “drawbridge down”. If you believe the public are incapable of making a correct decision without politicians intervening, then it isn’t just referendums you ought to be questioning; its elections as well.

A referendum on this single treaty won’t solve everything. It may be that we just need to take a hit so the public, denied a voice for so long, can vent its frustrations once and for all. If we have a referendum though, we will no longer be able to simply indulge in arguing semantics. I would like to be on the side which argues for giving national parliaments a greater say on EU policy, for an EU citizens’ initiative and for reform of the CAP and CFP. Wouldn’t you? What’s stopping us?