Okay, I got this meme from Andy Hinton (not to be confused with Alex Hilton – learned that lesson!):

1. Comment on this post.
2. I will give you a letter.
3. Think of 5 fictional characters whose names begin with that letter and post their names and your comments on these characters in your LJ blog.

Because this is Quaequam Blog! I thought I would limit these to 2000AD characters: 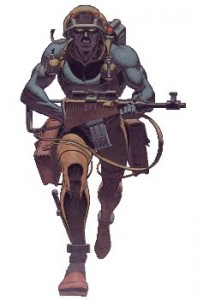 Rogue Trooper: the gayest strip in 2000AD’s history (that’s not a criticism by the way, just an observation), the original run by Gerry Finlay-Day was about a genetic infantryman who is the lone survivor of the infamous Quartz Zone Massacre. Determined to track down the traitor general who sent his “buddies” to their doom, he goes rogue, kept company only by the personality-encoded “biochips” of his best friends. By astonishing coincidence, he is called Rogue while his marksman friend is called Gunnar (his chip is in Rogue’s rifle), his quarter-mastery friend is called Bagman (his chip is in Rogue’s, er bag) and his, er, fairly useless friend is called Helm (can you guess where they keep his chip?).

A typical GF-D strip would feature Rogue encountering a woman, flirting with her, his “buddies” getting outrageously jealous and for her to turn out to be an evil traitor. Seriously, I don’t think there is a single female character in the original run (up to the point when they track down the traitor) who doesn’t turn out to be a villain.

If that isn’t homoerotic enough for you, how about the fact that the lead character runs around topless (in a warzone – very sensible).

Original artist Dave Gibbons eventually did a reboot of the character (called War Machine), which was actually very good and reprinted in Heavy Metal. Sadly, the ongoing series that came out of that was Terrible McTerrible. 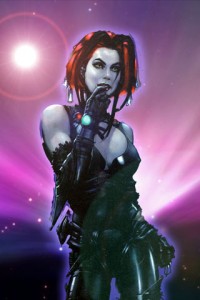 Durham Red: Johnny Alpha’s putative replacement sidekick (after his, very-obviously-boyfriend Wulf was killed off). Shortly afterwards, Johnny went and died himself and Red decided to go into suspended animation to emerge, millennia later, as possibly the most obviously sexy character ever to appear in the comic, as drawn by Mark Harrison. In the future, apparently, clothing can defy gravity.

Not surprisingly, Durham’s reinvention was an instant hit with both boys and girls alike (even if the strips were rather shallow and not up to writer Dan Abnett’s best), but Mark nearly went bonkers drawing her mind-bogglingly complicated CG strips. He now appears to eschew Photoshop in favour of good old fashioned paint. 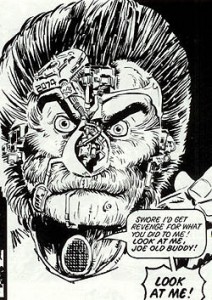 Rico: sort of a two-for-one here as Rico can refer either to Joe Dredd’s twin brother or Joe Dredd’s rookie. Given that all three are clones of each other, the distinction is a fine one, although Rico Dredd becomes evil while Judge Rico is (at the time of writing) one of the good guys.

The whole “what’s it like being a clone?” thing has been used to good effect by John Wagner over the years. The exact reason why Rico Dredd went bad has not been fully explored, by Wagner at least. But Rico was originally created by Pat Mills, who had a go at the character in 1995 (during his chaos magick weirdie phase), which was not entirely successful and seems to have acquired apocryphal status during the years.

Rico occasionally appears in one of those dreadful “rogue’s gallery” type stories where Dredd is either haunted by popular villains past or, in the case of Helter Skelter by Garth Ennis, parallel universe versions of them actually team up to kick his arse. Generally speaking, if Wagner isn’t writing it, involving Rico in a story is likely to be a recipe for disaster. 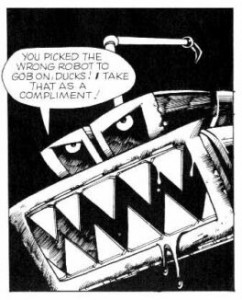 Ro-Jaws: a waste disposal robot who spends most of the strips he appears in rummaging through the contents of a bin or “cludgie.” A gloriously loveable character from the early days of “Tooth,” who ended up a character in search of a plotline.

Tyranny Rex: an earlier attempt at a “sexy” female character in 2000AD, this time from the fevered imagination of erratic genius John Smith. Half “Saurian” Tyranny is just your ordinary, green, girl-about-town who happens to have a whopping great prehensile tail. Not sure the tail thing went down well with the boys, to be perfectly honest.

Tyranny’s strips were Smith’s first attempts at a regular character, the first strip of which was about music piracy with a twist (“home cloning is killing music”). Very quickly her strips morphed into the Indigo Prime series. The promised ongoing series (featuring a transvestite dog apparently) which was to appear in first Crisis and then Revolver never emerged. I can’t help but feel this is a character which could get surprise us. It is certainly the case that Smith has got it in him. 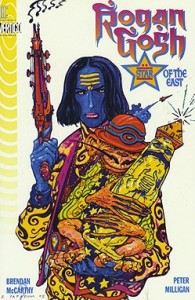 Rogan Gosh: technically not a 2000AD character but I’m including it here since I couldn’t think of any more characters with the letter R and the strip appeared in one of 2000AD’s sister magazines, so it counts. Milligan and McCarthy’s Rogan Gosh is, in my opinion, by far the most successful thing to come out of Fleetway’s brief experimentation with “adult” comics (with Skin – also by Milligan and McCarthy – coming a close second even if they did chicken out of publishing it).

It’s genius because it works on so many levels – is it an hallucination by Rudyard Kipling, the adventures of two blokes in an Indian restaurant or the product of the imagination of a boy committing suicide? All three narratives merge into one. No-one had ever tried doing Anglo-Indian comics before (there have been attempts since but they have been nothing like as successful, namely Grant Morrison’s Vimanarama and Pat Mills’ Black Siddha). One of the absolute highlights of my teenage years.

Anyone else want a go? Just follow the instructions above.

No Lembit news today, so I thought I would just link to the launch of Kirsty Williams’ campaign to succeed him as Welsh Leader instead.

According to Lib Dem Voice, 52% of members surveyed think the party will at best hold steady at 63 MPs after the next election or lose MPs. I voted for the “63-75 MPs” option (although I veer towards the 63-70 range) and it surprises me that members are quite so pessimistic.

For the record, I do think Chris Huhne’s analysis last week is sound. That isn’t to say we won’t lose seats to the Tories, but I think we can afford to be confident that we will hold our own. It does suggest a somewhat rattled party after a couple of difficult years.

There are few crossovers between this blog’s twin main obsessions (2000AD and Libby Dem politics). A few years ago there was some dig at the Lib Dems in a strip called Thirteen but that’s pretty much your lot.

So you takes your references where you can get them, as the accompanying panel taken from this week‘s Ten-Seconders strip demonstrates. Who could they be referring to I wonder?

Quote of the Week: “First you say hello to Vulf’s little friend!” Wulf Sternhammer gets up close and personal in Strontium Dog (1574).

Contents: Judge Dredd, The Kingdom, Stickleback and Strontium Dog in both progs. Shakara ends in 1573 to be replaced by a Future Shock in 1574.

Quote of the Week: “Who gains, who gains? That’s the clue Inga! Nobody kills for nothing – unless they’re a total psychopath like me, and even I like to turn a profit.” – P.J. ponders about his impersonator in Judge Dredd.

Review in less than 10 words: The worms turn.

Cover: Brendan McCarthy is back from la-la land, drawing his first 2000AD cover since 1991. And what a great cover it is too. I have to say I prefer the final version compared to the alternate version I found on McCarthy’s website (also pictured). Credit too then to veteran 2000AD designer Steve Cook for the final design.

Review in less than 10 words: Everything gets complicated.

Covers: 1569 features a rather odd picture of some mutants by Simon Davies, clearly still in his Stone Island phase. 1570 features Gene from Kingdom mid-battle with some giant insects. The latter is clearly the more obviously commercial, but I was surprised to see that 1569 had sold out in a couple of days at my local Borders.

It is interesting to note that just a few issues in, the new logo has already had a slight tweak. The big thick bar across the top of the page which I hated has gone transparent. Whether the redundant extra “2000AD” will stay for much longer remains to be seen.

Quote: “Gene did not even know there was a word called hide-rononiks. Your mouth is full of strange.” – Gene Hackman gets to grip with modern farming techniques in The Kingdom.

One of the many things I’ve struggled to get around too after the New Year break is my weekly Tooth Review. A double helping here, and I think I may continue doing them in clumps as I’ve found I tend to repeat myself a lot.

Quote of the fortnight: “Great steamin’ arse’oles!” Stickleback in Stickleback.

Contents: Both issues feature a Judge Dredd one-off and the continuation of Shakara, Kingdom, Stickleback and Strontium Dog from Prog 2008.

Covers: 1567 – Cliff Robinson draws a dramatic Johnny Alpha fron Strontium Dog, being lowered into prison to set Billy Glum free. 1568 – Nick Percival (is he still alive?) draws Shakara. Of the two, I prefer the Nick Percival, mainly because it is something different and I love the EC-style lettering. Still not convinced by the new “double” logo which now fills a fifth of the whole page; we’ve gone down this road before and each time the logo has been scrapped because the editor found it too limiting.