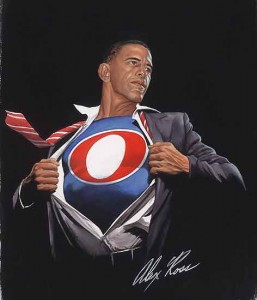 I sincerely hope this post isn’t seen as being disrespectful to someone who was clearly a remarkable woman, but Madelyn Dunham’s death today has a weird kind of appositeness. I’m hardly the first person to point out the almost fictional-feeling narrative of Barack Obama’s election campaign. He has a background that is almost too perfect, pretty much ticking every box going. He is almost a living cliche. The death of his grandmother just hours before polling (formally) begins sort of caps that off.

The similarities to the West Wing Seasons 6-7 narrative have been well rehearsed (and of course, that plot features an emotionally charged death in the finishing stages as well – which again was a case of reality and art getting mixed up). What is less clearly recognised in the UK are the surreal similarities to the Superman narrative, although this is clearly something not lost on Obama himself. A strange visitor from another continent (work with me here, I’m paraphrasing), who never knew his father yet lives in his shadow, raised by an elderly couple in Kansas, who goes to the big city to make himself… just watch Superman: The Motion Picture (still the best telling of the origin story) to see what I mean. In fiction, everything has a price. It is necessary for Jonathan Kent to die so Clark can become Superman. If you believe in a creator, it is a pretty cruel one who makes Obama pay a similar price on (hopefully) the eve of his victory.

But of course the Superman narrative is about as American as it gets – the outsider who not only integrates into the culture but becomes its paragon. It’s the story that makes non-American cynics like myself capable of forgiving the young country every time. That same optimism that makes Donner’s film so evocative (and which Bryan Singer got so horribly wrong in his poorly-conceived sequel) is what fuels the Obama campaign. By contrast I can see nothing of the American Dream in the McCain-Palin campaign, just something much darker. Even Bush didn’t so self-consciously set out to divide his own country in the way that certainly the Palin camp has done. It is truly scandalous.

I have to admit that at the start of the summer I would enjoy going around winding lefties up by saying I really didn’t particularly mind who won; McCain or Obama. I wasn’t entirely joking – McCain really did represent something different: finance reform, respect for human rights, economic liberalism. At a stroke however he reversed all that by appointing Palin at the end of August and I was able to not so much come off the fence, but leap off it.

So good luck from me Barack. I still have my doubts about your substance, but what you represent is something pretty damn important. You really must win today.

1 thought on “From Smallville to Metropolis: how Obama represents the American Dream”