Ultimately, it is healthy in a democracy to have people like Guido sticking their fingers in the air at the establishment. They often go off down a cul de sac, they often find themselves doing the establishment’s job for them (cf. his work with Ed Balls to screw over Colin Challen), but they allow us a valuable corrective.

Equally, we need political correspondents like Nick Robinson, who take it upon themselves to explain rather than expose. They often pull their punches when they shouldn’t, and in the interests of ‘balance’ often go too far in terms of presenting nonsense as legitimate points of view, but they nonetheless perform a valuable service. To be fair, I get the impression that Robinson understands this, but I don’t think Guido does.

Thirdly, and a point that neither side seems interested in, we need parties and politicians an unedited platform from which to communicate directly with the people. That probably does not mean Â£10,000 incumbancy allowances of the sort MPs voted for themselves today (makes Hayden Phillips’ money-per-vote look fantastic in comparison, despite its deep flaws), but if we don’t have it, we’re left with Guido’s bile and Robinson’s sang-froid. 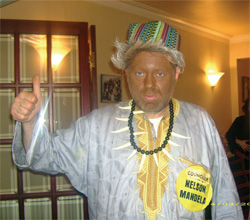 Come off it guys, this is just a joke! Where’s your sense of humour? It’s political correctness gone mad!

To make amends, perhaps Cllr Gordon ought to send Nelson Mandela the gift of poo. You know, for a larf.

The answer would appear to be, not always. Apologies for another poo related story, but it appears that Berlin Zoo’s Panda has died of heart failure caused by acute constipation. But there is speculation of a cute other cause (geddit? GEDDIT?!).

A couple of weeks ago, I was castigated for saying that nationalism was an ugly thing, citing the example of “Scottish Nationalists chucking faeces through English peopleâ€™s letterboxes“. I later apologised for capitalising the en in Nationalist (I never meant to imply I thought it was SNP policy), but insisted (and insist) that it is the sort of nasty thing that nationalism leads people to conclude it is acceptable to do.

Via the English Democrats, I now learn of a Scottish website encouraging Scots to do exactly this to their English neighbours as the ‘ultimate revenge’. Only it is plastic. And meant as a ‘practical joke’. Ho ho ho.

Of course, the English Democrats have gone off on one, suggesting it is possibly an offence. I’m in the very uncomfortable position of actually agreeing with them for once.

So, all my SNP friends who have declined to condemn their party for accepting half-a-million poonds from Scotland’s most famous homophobe and then failing to vote for legislation designed to outlaw discrimination on the grounds of sexual orientation, will you condemn this?

Just add your denunciation in the comments box below.

UPDATE: postapoo has gone down, but their jape has resulted in the first bit of publicity for the English Democrats in years. Sky News. Metro.

Daniel Martin has listed his five favourite – and five worst – Doctor Who companions. In doing so he exposes himself as a member of that odd bunch of people: Doctor Who fans who liked Ace.

There’s a lot of them, but I’d love to know why. As an attempt to make the companion a central part of the series, prefiguring Rose Tyler, I suppose it was a noble effort. But, seriously. The bomber jacket. The ‘attitude’. The bombs. At least K9 was knowingly stupid.

And Brian Cant was better on Playbus as well.

Two interesting polls today. Times/Populus suggests that the SNP is well ahead in Scotland, but that support for independence has plummeted.

I don’t doubt either trend, but combined they do suggest that the Scots still aren’t actively engaging with the election to the extent that this accurately predicts how they are likely to vote. I suspect that increasing anxiety and confusion about independence can only drag the SNP share down. The incredibly low ‘other’ score also suggests that the small parties will get a boost once the RPA forces the media to start reminding people they actually exist. I suspect this too will drag down the SNP vote as people start to realise they can vote against Labour AND not support the SNP.

The Independent/CommunicateResearch poll meanwhile shows a significant dip in Tory support following the budget. Once again, you can’t take this as any great prediction. What it does suggest however is that the vote is incredibly soft, and volatile, at the moment. These massive boosts the Tories have been enjoying in recent polls say a lot more about the power vacuum at the top of the Labour party than anything that Cameron is doing.

Both polls are bad news for the Tories. The former suggests they are likely to end up in fourth place in Holyrood, while the latter suggests that once Labour sorts itself out, and the Tory policy reports start being published, the Tory vote can only fall. Not only can Labour not afford a snap General Election, but the longer they can put it off, the longer the wheels will start to come off the Tory bandwagon.

Is it just me and my prejudices, or is Gerry Adams writing a funny article about the trials and tribulations of being a candidate, without mentioning the Ireland question at all, utterly bizarre? This from a man who is still regarded by many as nothing more than a terrorist.

I’m not having at go at him, indeed I would encourage more of the same. For me it is significantly more symbolic than that stilted photo of him and Ian Paisley sitting together at Stormont for the first time. But the idea of Northern Irish politicians being ‘normal’ is going to take quite some getting used to. Reading it was like peering through into a parallel dimension. It’s good, but it does feel odd.