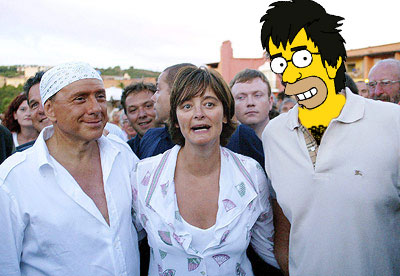 I’m currently sitting in an internet cafÃ© in the heart of Florence (better known as Firenze to Harry Potter fans). I’ve been in Tuscany for just under a week now, and in Florence itself since Friday, so I’m starting to get the feel of the place. Sadly, the same cannot be said for my Italian keyboards!

This is my first time in Italy. I spent the first couple of days desperately trying to acclimatise – I think I’m there now. Economically, it is a funny mix of seeming 10 years behind the UK, and being somehow ahead of us. A lot more places – including our hotel – don’t accept credit cards compared to the UK and while chip-and-pin exists, it is unusual. On the other hand, the trains are much cleaner and much cheaper. The nature of a medieval Tuscan town like this is that the rich and poor live on top of each other, which is very different from London these days.

The Italian attitude towards religion seems to be one of studied hypocrisy. Where else can you find free rosaries given away on the front of magazines and condom vending machines on every street corner. I’m not convinced it is an entirely healthy attitude as it seems to lead to a very pick-and-choose attitude. I think I prefer the British culture of simply ignoring the church.

In a place like Florence, you can’t ignore what a monstrosity the Catholic church has been during most of the last two millennia. The studied hypocrisy is deeply ingrained and goes right to the very top. The Duomo – a stone’s throw from here – was essentially an architectural exercise in willy-waving. The Medicis were very keen on using religious iconography to justify for themselves a status that was earned almost entirely through usury and war-mongering.

You may have gathered, I’m not entirely taken by the place. To be fair, I’m impressed by the grandeur; it just seems so decadent. Perhaps once we get passed visiting the cathedrals and palaces and start to explore to social history in more detail, I’ll be more generous. Certainly I was much more taken by Siena, where we saw the Allegory of Good and Bad Government and Their Effects on the Town and Countryside by Ambrogio Lorenzetti. The mirror of all this tyranny was a desire for liberty and independence, which this fresco encapsulates superbly. Indeed, we went on to visit the Santa Maria della Scala, a medieval hospital which became the focus of a power struggle between the lay community, who wanted to use their resources to help the poor, and the priesthood, who basically wanted to spend the money on themselves.

So there is plenty here to inspire me as well as appall. Still a few more days to go before we return to old Blighty.

In case people are wondering where I am, I’m currently holidaying in Tuscany.