Strange that the BBC fails to mention claims of vote-rigging in the poll to find the Greatest Russian. Could it be that they felt it would be a little rich coming from them?

If the BBC had run the poll, no doubt Stalin would have come third, only for them to come up with some convoluted excuse for why he managed to come first after all. 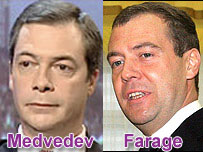 Has anyone noticed the alarming similarity between Dmitry Medvedev and Nigel Farage (or should that be Нигел Вараге)? Surely the resemblance is too much to be a coincidence? I think we should be told.

I can’t help but think that this headline is damning Yeltsin with faint praise: