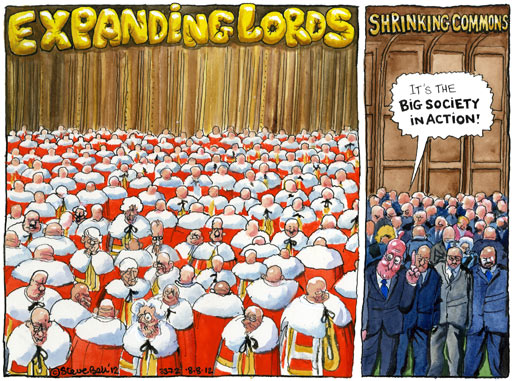 I’ve had enough articles published in newspapers now to know that you can’t blame the author for the often shockingly misleading titles that appear above their articles, so I will give Lord Steel the benefit of the doubt and assume that he is not so disingenuous as to actually baldly state that “The Lords needs reforming now, not in 2025“. The article beneath the headline is a bit better. But only a bit.

Where does one start? Well first of all, if he is serious about his package of interim reforms, then the simple answer is to put them into the Lords reform bill and ensure it gets passed without delay. Yet for some bizarre reason he points this as an either or option: either we make some incredibly minor changes in the short term or we focus on reform for the long term. This is an entirely false distinction. What’s more, the Lords only started talking about these piecemeal reforms once they had realised that the electoral reformers weren’t going anywhere.

To offer dire warnings of the cost of an elected second chamber while demanding pensions and increased remuneration for unelected peers is a particularly audacious claim, but not the only one. Of equal status is the demand for an “independent” appointments commission. This commission would indeed be independent – of everyone – except for the House of Lords itself which would then exist in a state of permanent self-perpetuity. One of the main reasons for having elected members of the second chamber is to get away from the idea that the only people suitable are the usual clubbable suspects: here Steel is claiming we should take the status quo a step further.

It is remarkable to read a former member of the Scottish Parliament (which uses the Additional Member System) issuing non-specific yet dire warnings about what might happen if we have “elected senators (with a 15-year tenure as proposed), possibly of different political parties, wandering about their constituencies claiming, correctly, that they too have a mandate.” Strangely, Scotland, Wales and Northern Ireland somehow manage to struggle on in such circumstances – as indeed do parish, county and district councillors (not to mention MEPs).

The old canard about the House of Lords challenging the “primacy” of the House of Commons should also be put to rest. What on earth is wrong with a bit of competition? Is Steel really suggesting that it would be a bad thing if the Lords were seen to be doing a better job at representing people than the Commons? That we should stick with mediocrity because it might force MPs to raise their game? Linked to this is his deliberate obfuscation between the concepts of “powers” and “conventions”. The debate over what powers the second chamber should have has been settled: essentially it should have the same powers it has at the moment. And yes, the Cunningham Report did indeed say that a change in the Lords’ composition would mean that the conventions too would need to be rewritten, but those are two entirely different things.

The Parliament Acts limit what powers the Lords have in terms of delaying and rejecting legislation, but the Salisbury Convention has – until recently at any rate – held the Lords back from using those powers in full under normal circumstances. Will we need a new set of conventions if the second chamber were to be elected? Of course. But then, as I pointed out last week, with governments elected with 36% of the vote and now a coalition government, we urgently need to tear up the existing ones and start again in any case. This isn’t a problem that magically disappears if Lord Steel has his way and gets to kick elected second chamber proposals into the long grass.

To make things worse, Steel himself admits that the current Lords is pretty much a law unto itself. In the final paragraph, he makes the oblique threat that “the risk the coalition now faces is that its plans will get bogged down in endless argument in both houses, clogging up valuable parliamentary time.” Or, to put it another way: “nice legislative programme you’ve got there; it would be a shame if something was to happen to it…”

Perhaps he could tell us: what is the name of this “convention” that dictates that the Lords gets to derail a government’s legislative programme whenever its future is open to question? In what way is this form of blackmail in any way defensible? Perhaps we should name it the Steel Convention?

I could go on but really: why waste my time? This isn’t an intellectual argument being offered, but a threat. It will be a test of the coalition – and of the leader of the opposition – to see how they respond.