Independent political commentator John Rentoul does a neat line in pricking the balloon of journalistic and political hyperbole with his “questions to which the answer is no” series, so it is curious that he has managed to come up with an absurd, over the top conspiracy theory almost entirely devoid of fact today. Writing about Charles Kennedy’s article in the Observer on Sunday in which he poured cold water over the Lib Dem-Conservative coalition, Rentoul speculated:

What was he up to, eh? I can’t help thinking that he thinks he still has a chance of returning to the leadership of the party, the position out of which he believes he was cheated by Sir Menzies Campbell and his bag-carrier, Nick Clegg. Kennedy seems to be positioning himself to lead a Lib Dem rump out of the coalition government when things turn sticky in a few years’ time.

Ooh, maybe. Except for a couple of things:

1) If Kennedy is planning a comeback, somehow he has failed to spend any time ingratiating himself to the party membership. Since resigning as leader, his presence at party conferences has not been particularly high profile. Neither has he made much effort to ingratiate himself in the media (sitting on the This Week sofa for a month notwithstanding). He hasn’t exactly been working the rubber chicken circuit.

2) The general response that I have witnessed to the Kennedy article on Sunday amongst the membership has been one of irritation. It is one thing to oppose the agreement and take a principled stand. I have enormous respect for people who have put their head above the parapet in this way, such as Linda Jack (maybe we should make her leader if it all goes wrong?). It is quite another to express some concerns, sit on one’s hands during the crucial vote itself, write an innuendo-laden article in a national newspaper and then fail to even turn up to the party’s special conference to make your case.

It is entirely possible this coalition will go tits up and the Lib Dems will find themselves adrift. However, one thing that none of us can deny is that we all share responsibility for the decision to enter government. If we do find ourselves looking to find a new leader in a few years time, it is unlikely to go to someone who has simply carped from the sidelines.

According to the Independent:

The Liberal Democrat leader, Nick Clegg, faced embarrassment yesterday after it emerged that his party used a photo of the Oscar-winning actress for an advert in its conference brochure â€“ without obtaining her permission.

A picture of her on the red carpet at the 2007 Golden Globes was doctored to make it look as though she was at the Lib Dem Council Awards at the party’s conference in Harrogate on Friday evening.

The picture left the impression that Ms Winslet, who has never revealed her political affiliations, was a Lib Dem supporter.

There’s a lot more nonsense but I won’t quote it extensively. A few facts before the Independent gets too excited:
1. The advert is for the Lib Dem LGA Group, not the Lib Dems.
2. The advert is on an internal party document – it isn’t aimed at the public.
3. Who was left under the impression that Winslet was a Lib Dem supporter? The article doesn’t say. It was just a stupid joke, softly taking the piss out of Winslet for her emotional award acceptance speeches. That was the impression I got from it. Is there any evidence at all that a reasonable person (as opposed to a hack trying to make a story out of nothing) would draw any other conclusion?
4. The picture was indeed doctored – in a really obvious way that makes it obvious it is meant as a joke. Again, what kind of a moron would draw any other conclusion?

Clearly the Independent assumes its readers are morons. That may not be an entirely unreasonable assumption actually, given how poor the newspaper has become in recent years. Why else do they stick with it? 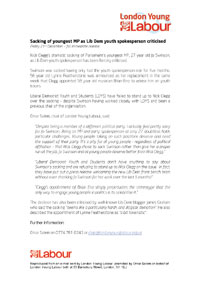 They teach airbrushing technique young in the Labour Party it seems. You may recall, dear reader, that I took Chair of London Young Labour Omar Salem to task before Christmas for manufacturing a story about the Lib Dem reshuffle by selectively quoting this website and getting a whole heap of facts wrong, a story which sadly Independent Political Editor Andrew Grice allowed himself to be taken in by. Now it would appear that Omar has gone back and tried to destroy all the evidence of his stupidity.

Of course, that leaves me with a bit of a problem – I’m now open to the accusation that I made the whole thing up. Fortunately, someone saw fit to send me Omar’s press release in PDF format for your perusal. Enjoy!

UPDATE: It occurred to me I ought to include the web version of the press release for you to compare and contrast (and just in case Omar decides to change it back again!). Plus, I should point out that, as a researcher for Emily Thornberry MP, Omar has of course learned from the best when it comes to doctoring press releases.

Credit where it’s due, when it comes to getting lies repeated as fact, Omar Salem is clearly a latter day Joseph Goebbels. Perhaps he’s been getting advice from his erstwhile colleague Miranda Grell. Andrew Grice at the Independent has regurgitated his press release all-but verbatim over on his blog, incredibly even painting this as “Clegg’s first rebellion.”

What’s interesting is that Grice has filed his article 24 hours after Salem put out his press release and has subsequently visited this website where all the facts have been corrected for him in easily digestible, bite-size chunks. Yet for some reason that hasn’t stopped him from blundering in. Modern news values, eh?