The Times poll today showing that the majority of peers are not only opposed to Lords reform but feel it would be “unconstitutional” to proceed without their blessing begs an important question: in a country without a codified constitution, what on earth is “constitutional” anyway?

Yet while the use of the Parliament Act may be considered illegal, it could equally be argued that for the Lords to block reform, and thus make the use of the Parliament Act necessary, could only be done by steamrollering over the conventions which have allowed the House of Lords to stay its execution for the past 60 years. The Salisbury Convention was introduced specifically to prevent the unelected Lords thwarting the will of an elected Commons. Its precise formulation has come under strain with the advent of governments being formed with just 36% of the vote – and let’s not get started on how it should work with a coalition government. Despite this, nobody has contested the basic underlying principle at its core: public will, as expressed through the ballot box via the party system and the House of Commons, should always win out.

It is with this in mind that I feel the need to point out that all three major parties fought the last election with a specific manifesto commitment to reform the Lords. It would be an absolute scandal for the Lords to presume to exercise a veto, akin to the worst examples of clericocracy that we are all too ready to condemn when it happens in Iran. By all means let’s see the Lords doing their job and scrutinising the legislation with a fine tooth comb, but blocking it outright should be considered out of bounds.

All three party leaders should come down on this, and hard. Anyone else wondering why they haven’t done so already?

UPDATE: I’ve written a piece on Comment is Free, building on this.

And finally, I should have urged everyone to sign Unlock Democracy’s petition on reforming the House of Lords. 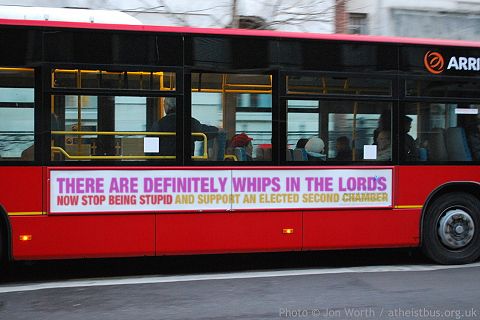 If you can ignore the fact that the Conservative policy is for the House of Lords to be elected using the first past the post system, which is itself a closed list system, you could be forgiven for thinking they had quite a principled take in the Lords reform debate a few weeks ago. To quote Theresa May:

Yes, under the Government’s proposals 50 per cent. of the new peers would be elected, but the Government propose that those elections should use a list system. Effectively, therefore, the parties choose who is elected, so peers would owe their place in the Lords to their party bosses. Crucially, it would make it much harder for independent candidates to run for office successfully. We should do all that we can to encourage independent elected Members in the other place, and I doubt that the Leader of the Opposition believes that a list system would make for a truly independent upper Chamber.

That was all, so, last week though. Now they are considering tearing up the existing rights of party members to order the closed lists for the European Parliament elections. No doubt Theresa May’s response to this will be, as it was at a Hansard debate last month, that the Tories use primary selections, so it shouldn’t matter how the choice of candidates is restricted (as it has been by the A-list), but it doesn’t wash. The hunger for control from the centre is just as strong amongst Cameroons as it was amongst the Blairites.

Say what you like about the Lib Dems, but we tend to take these rights for granted. We have real debates at our conferences in which the leadership occasionally has to fight to save their cherished policies; the Tories pretend to be on Dragon’s Den. If a commitment to democracy doesn’t actually run through you veins, faking it tends to make you look slightly ridiculous.