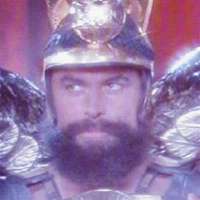 Ming’s successor, the Emperor Barin, has demanded undying loyalty from Prince Vultan over his policy to block a referendum on the Lisbon Treaty. Two questions arise from this. Firstly, should Barin have Voltan executed? Secondly, what does it say about iwantareferendum that they are targeting Heath anyway, regardless of his well-known views on the Reform Treaty?

The second one is easy to answer and it merely helps reinforce the point I’ve been making here for weeks. Iwantareferendum is of course a Tory front. Those people out there worried that the UK might eventually see US-style “soft money” derailing British politics simply haven’t been paying attention. In the last election the Tories did a great job at using the hunting issue (another fringe subject) to seize several seats via the “independent” likes of Vote OK. Iwantareferendum is remarkably similar.

Both purport to be democratic organisations, yet both are coincidentally partisan and are about exploiting a profoundly undemocratic electoral system that makes a few thousand swing voters in key marginal constituencies the ones who will decide the entire national election result. If we didn’t have first-past-the-post these campaign organisations simply would not exist. They don’t enjoy popular support and they are dependent on exploiting a broken electoral system. I’ve just returned from Amsterdam. You might expect that in the Netherlands, feelings would be running high over the fact that despite rejecting the constitutional treaty by referendum in 2005, Lisbon is simply being ratified by Parliament. Yet notwithstanding the usual suspects – who are in no fewer numbers than in the UK but who lack an electoral system they can exploit – it simply isn’t an issue for them.

Back to Voltan/Heath, Barin/Clegg is on dangerous ground if he intends to lay down the law here. Regardless of the rights and wrongs of our policy not to have a referendum on Lisbon, the simple fact is that it has not been approved by conference. Both candidates agreed with the Ming line during the leadership election so party opinion was not tested then either. As anyone who has followed the debate on the blogosphere will recognise, the argument over whether to have a referendum on Lisbon or an in/out one is at best finely balanced at worst obscurationist in the extreme. Fundamentally, the public are disinterested in such nuance. At least anti-referendum-at-all people like Jonathan Calder have a consistent, clearly put position.

I have to admit that I assumed that this matter had been resolved within the Parliamentary Party months ago, which was why Clegg was comfortable with taking it one step further and not merely abstain from the Lisbon referendum vote but actually oppose it. Clearly I was naive, but no less naive than Clegg and his kitchen cabinet were being by making this commitment.

David Heath is being asked to stick to his principles and lose his front bench job or blindly follow Clegg and lose his seat. It is absurd of Clegg to put him in such a position. And once again, there is a vague hint that he is doing so out of a desire to look “tough.” As I’ve written before, highlighting our own divisions at a time when the Conservatives’ splits are ripe to be exploited is a foolish course of action.

We’re a grown up party that can manage disagreement without going into meltdown. It is one of our greatest strengths. Yet it is one that in this instance the party establishment, as it so often does, has run scared from. We haven’t had a wider debate on this issue. If ever there was an issue to relax the whip, it is now.

The confusion over whether the government is or isn’t going to support moves to scrap the blasphemy libel laws has reminded me of the ongoing debate over the government’s plans to make it illegal to incite hatred on the grounds of sexual orientation.

In a bad case of wanting to have it both ways, Peter Horrocks of the Evangelical Alliance told the Today programme this morning said that while he accepted that “everybody knows it’s not really going to be used again,” he was concerned that scrapping the law would “send out a signal.”

Much of the debate over the proposed law against inciting hatred of gay hatred has been characterised in similar terms, and of course we had people arguing against scrapping Section 28 in the recent past on the grounds of symbolism. Gordon Brown is a big fan of symbolism. His plan to re-reclassify cannabis has nothing to do with changing a failed policy (it’s arguably been successful, which is why he may have to overrule his own advisory body in order to do it) and everything to do with sending signals. Brown could save himself all this parliamentary time simply by installing two large neon signs outside Number 10 – a thumbs up and a thumbs down – and light up each one at various times depending on the issue of the day.

The symbolism issue is key when it comes to the gay hatred law. I accept David Heath’s argument that the law isn’t fundamentally illiberal; I’m more sceptical about his insistence that it isn’t symbolic. As Gavin Whenman points out, we already have legislation against incitement; what is so peculiar about gay hate that requires specific legislation? I’m prepared to be convinced here, but my sense is that at the heart of the Lib Dem’s reluctance to oppose this law is a fear that Labour will simply throw it in our faces in the puerile manner that they regularly do over our limited opposition to their (failed and again largely symbolic) anti-social behaviour legislation.

The sad fact is, such symbolism works. It gives the media something they can communicate easily; it makes it look as if the government are keeping themselves busy. But just as Labour’s gimmickry about crime hasn’t actually made anyone feel safer, exploiting prejudices through symbolism ultimately just makes people feel more and more divorced from the political process.