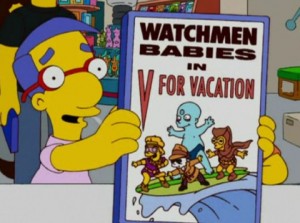 I’ve been meaning to write a post about the upcoming Watchmen film and comic book films for ages. Having just read the first chapter of Dave Gibbons’ memoir of his experiences drawing the comic, Watching the Watchmen, I’ve finally decided to put finger to keyboard.

For a lot of us avid comic book fans, especially those of us who were weaned on Alan Moore’s work in the 80s, this is an extremely anxious period for us. We have experienced the utter awfulness of From Hell and League of Gentlemen. Then we had V for Vendetta, a film that was actually not bad and which swayed between being an almost scene-for-scene reproduction of the comic and a bastard hybridisation with The Matrix. Yet it has made its mark in some quite surprising ways, inspiring the whole Anonymous movement and cropping up here and there in the popular media. It has made its mark. 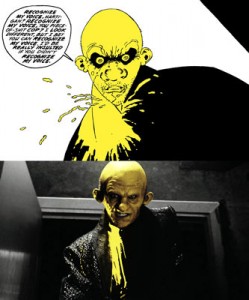 Factor number two is Zack Snyder. A hitherto hack-resembling director who committed the heinous crime of having his zombies run in his remake of Dawn of the Dead (sidenote: Simon Pegg has now started his Slow Zombie movement, presumably akin to Slow Food), he went on to direct the ridiculous 300. Like the other Frank Miller adaptation Sin City, this was a very close adaptation of the comic original. Also like Sin City, I found bits of it cringingly embarrassing. Unlike Sin City however, I did get the impression that both director and actors were enjoying themselves slightly subverting the material. Or did I just imagine this? I’m genuinely undecided as to whether all the scenes of Spartans cavorting with one another were done with a wink to the audience or with the same level of hyper-heterosexuality of the writer-artist’s original that just happened to come across as camp as a row of tents.

The key question for Watchmen therefore is there more to Zack Snyder than meets the eye? Is he capable of viewing the source material with a critical eye or will we just get another soulless carbon copy like Sin City?

Another factor is The Dark Knight. The Nolan Brothers (I have yet to figure out their relationship with the Nolan Sisters) have made what for me is the best ever “superhero” film, but they did this not by simply adapting an original work but by mashing up some of Batman’s greatest hits, specifically Year One, The Long Halloween and Killing Joke, while the ending serves as a kind of prologue to The Dark Knight Returns*. Alongside Lord of the Rings, it functions as a rebuke to the received wisdom that a comic book adaptation has to be a literal translation of the source material (sidenote: another slight challenge The Dark Knight represents to Watchmen is that fact that the former film has borrowed the latter comic’s idea of using scarring to represent The Joker/The Comedian’s grin). I can’t pretend that the apparently less literal Paul Greengrass version, with its apparently more overtly political edge, sounded fascinating. Is there a danger in sticking rigidly to the source material that it will end up being a period piece about the 80s? 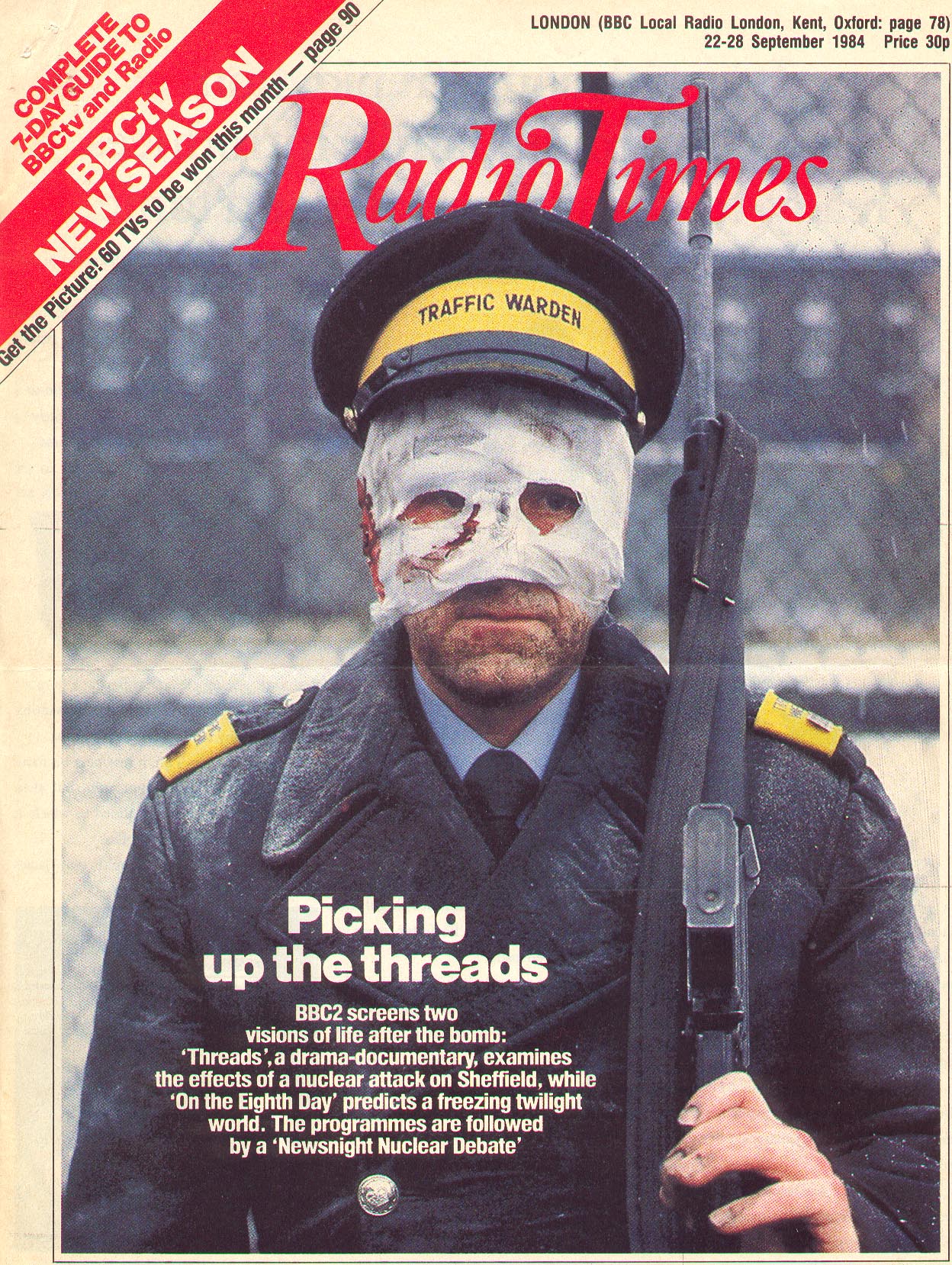 It was interesting rereading the original over the summer. For those of us who grew up in the 70s and 80s, nuclear holocaust was something we grew up with. Although I didn’t see it at the time, I remember the buzz in the playground when the BBC showed Threads. I remember the horror of When the Wind Blows, a book which still holds enough power over me that I haven’t read it from cover to cover or watched the film. And then there were the more allegorical expressions of nuclear-anxiety such as the BBC’s adaptation of the Day of the Triffids and Survivors. It was this undercurrent in popular imagination that Watchmen was feeding into (even its contemporary, The Dark Knight Returns, revolved around a nuclear explosion and views Superman as having an influence on foreign policy in a very similar way to how Alan Moore regards Doctor Manhattan).

Modern anxieties are somewhat different. In place of a fear of apocalypse we have this more generalised angst about entropy, the death of hope and a nostalgic longing. Those themes, ironically, are picked up in Watchmen, but as the features of a world changed by the existance of a superhuman in it. In Watchmen, the US has had 18 years with Nixon in the White House. In 2008, we’ve had the best part of 28 years with a Bush in the White House. Watchmen offered a vision of a world similar to our own with dashes of unimaginable high technology thrown in, being treated as normal. Imagine how someone from 1985 would imagine today’s world of iPhones and Facebook (sidenote: it is interesting how wrong Alan Moore got it in this respect: the presence of a walking fusion bomb in the government’s pocket like Doctor Manhattan would more likely revolutionise communications technology than it would transportation, although he was probably more on the money when in comes to how fabrics technology would transform fashion). In short, what Watchmen shows us is very representative of the world we have today. That’s a real problem for a film maker approaching the book like it was a period piece. And with that rapscallion Barack Obama going and getting himself elected on a wave of hope and no doubt still in his honeymoon period by the time the film comes out in June 2009, it may be that Snyder finds the Zeitgeist has moved on. 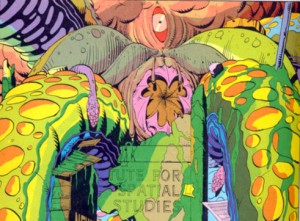 What’s more, the ending of Watchmen – a big explosion in central Manhattan killing thousands of innocent bystanders (sound familiar?) – was supposed to sort out the world’s problems. We now have empirical evidence to show the world doesn’t work like that, but then we don’t live in a world of two opposing Super-Powers any more (two Super-Powers which, in the comic, are duking it out over a little-known country called Afghanistan; how times have changed!). Perhaps the world was that simple back then. Either way, it makes the ending of the comic come across as unbearably naive to these jaded eyes, although in fairness the ambiguous ending with the New Frontiersman editors possibly about to unearch Rorschach’s journal might end up undoing all that. There is simply no way Snyder can get away with not changing the ending without looking like an idiot.

In short, time has not withered Watchmen, but the world has moved on. A slavish adaptation won’t reflect that, and that will be potentially lethal to the whole project. We have just a few months to find out.

* I have to say, I do hope that the Batman threequel ends up being an adaptation, of sorts, of The Dark Knight Returns. It looks to me as if all the foundations have been set, with the main character walking off into self-imposed exile. What better way to kick off the third film, by fast forwarding fifteen years?

I also note they were extremely careful not to show Barbara Gordon’s face in the second film. Set for a return as Batgirl/a female Robin perhaps? Of course, in my dream, it would include the iconic imagery of the Frank Miller original – the horseride into town, the titanic struggle with Superman – but those may be a little too fannish for polite company. Still, they kept the iconic moments of Year One in the first film, so why not?