On Sunday, my gf finally forced me to sit down and fill in my pension form. For various reasons which I won’t go into, it has taken me a long time to do this and take advantage of my (teeny tiny) employer contribution.

Imagine my dismay therefore when I discover that no sooner have I put the form on the finance officer’s desk, that I get a twitter message announcing my own Treasury spokesman is demanding me to pay it back! 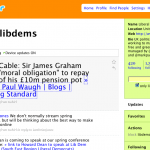 Vince Cable: Sir James Graham has a “moral obligation” to repay some of his Â£10m pension pot

Now, it isn’t clear, but it is just possible that Vince may have meant Sir James Crosby, who it has been discovered gets a cool Â£500,000 a year from the publicly owned HBOS (who also do my banking, albeit not for much longer) just for sitting on his arse after helping to cock up the global economy. But frankly I find it hard to see how the two of us can be confused as a) I am not bald, b) I am not a member of the wunch and c) I do not own any gold plated underpants (given Crosby’s dress sense I can only assume this must be what he spends his money on).

I will of course happily accept a grovelling apology from Vince. More than that however, I quite like the idea of a Knighthood (although that will make me even less popular with Republic), so anything he can do to wangle me one would be much appreciated.