David Cameron’s latest effort to get wit da yoot involves having tea and crumpets with a man who goes by the name of Rhymefest.

Rhymefest, who may or may not be allowed to sleep with Cameron’s wife afterwards, accuses Dave of knowing nothing about rap.

Far be it for me to stick up to Cameron here, but it should be pointed out that this photo demonstrates that Rhymefest knows nothing about the wearing of eye protection. My old science teacher, Mr Marshall, would have had a fit. 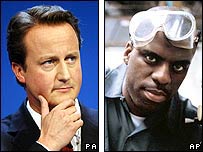 It is of course a matter of some debate as to which of these areas of ignorance is more serious, but I would suggest that knowing about rap isn’t likely to stop you from being stabbed by a 12 year old with a flicknife, while knowing about eye protection is liable to prevent serious blindness when using a lathe.

And they wonder why US industry is in decline.