The name “quaequam blog” is an injokey reference to 2000AD, the UK’s longest running science fiction comic. 2000AD has been in near-continuous publication since 1977, and is particularly famous for the character of Judge Dredd, as well as being one of the testing grounds for numerous British comic writers and artists such as Alan Moore and Dave Gibbons.

2000AD has always been “edited” by Tharg the Mighty, an alien from the planet Betelgeuse (in the 70s and 80s, it was common for boys comics to have a fictional editor at the helm). Tharg became particularly known for the Betelgeusian phrases he peppered his speech with, including the phrase “Quaequam Blag!” – an expression of surprise or outrage.

When I started my blog back in 2003, which originally was intended to be as much about comics as politics (I admit the latter tends to dominate), “Quaequam Blog!” seemed like a suitable way of reflecting both the comics aspect and the rather forthright opinions that were to be expressed. It has gone on to vex many people since, most of whom appear to assume it is some kind of pretentious Latin phrase.

2000AD has been a passion of mine since I was 11. My first Prog was 497, although I quickly went back and amassed the preceding five years’ issues. And it has to be said that it has informed my politics. 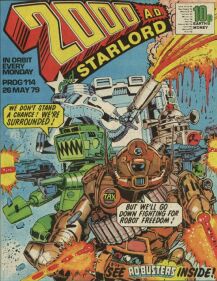 For one thing, 2000AD has always been staunchly anti-racist. Whether the metaphor happens to be robots, mutants or aliens, the message of a significant number of major 2000AD strips has always been to stick up for the oppressed and discriminated against. The very first story in which the Judge Dredd series finally comes alive is the Robot Wars, where the parallels between the robots in the story and black slaves is made quite explicit. This was followed up a year or so later with Ro-Busters and Strontium Dog (both originally in sister publication Starlord but were continued in 2000AD when that title folded), in which the heroes were clearly not the normal humans. This theme reached its apotheosis in Nemesis the Warlock, with the racist humans fighting against the rest of the universe. 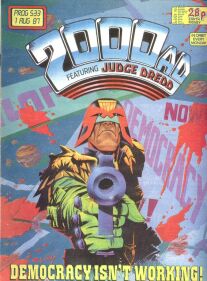 2000AD has also always been anti-authoritarian. This may sound surprising to someone who has only ever heard of Judge Dredd, but that strip has always dripped with satire. For me, the most eye-opening story was “Revolution” a three part Dredd strip which ran from 531 to 533. This is probably the first time Dredd was ever portrayed unambiguously as the bad guy (he’s often been presented as a bastard, but not quite in such a poor light). It had repercussions in the strip for years to come, but for me it was comparing the incidents of this strip with the events in Tiananmen Square two years later which made me realise this was rather too close to reality for comfort.

What 2000AD has never been about though is simple answers (at least when it is at its best). Judge Dredd may be an anti-democratic authoritarian (but never a fascist), but he saves his city – and world – on numerous occasions. The strip may not be a fan of authoritarianism but it is sceptical about democracy as well. Nemesis the Warlock is almost as much a villain as hero towards the end of its run. Almost all the comics heroes are deeply flawed in some way.

So there you have it. It’s got a silly name because I read too many comics. It’s better than spending a childhood reading Hansard under the duvet anyway.