I haven’t had much sleep, but here are a few random thoughts about the election.

I’m angry with the Labour Party. I did my bit: I voted Labour in a constituency where they are in second place to a Tory with a majority of 106 (Hendon). I admit, I didn’t do that last time, high as I was on the prospect of the LDs getting 30% of the vote, which turned out to be a false dawn. But I didn’t make that mistake twice.

But where the hell were Labour? During the campaign proper, just one highly generic Labour leaflet was hand delivered in our area. By me. It was clear that the guy in charge of distribution was overwhelmed and didn’t really have a clue what he was doing. Sure, they hurled a load of equally generic and uninspiring literature out in the post, but there was virtually no evidence of a campaign at grassroots level. My wife and mother in law, who had offered to help, were given nothing to do (apart from the aforementioned leaflet and a target letter a few weeks earlier). You’d be forgiven for thinking Hendon was a safe Tory seat from the level of activity either party were putting into it on the ground.

Meanwhile, Labour activists in North London are busy patting themselves on the back for booting Lynne Featherstone out of Hornsey and Wood Green. Leaving aside any personal feelings I might have about that, Labour winning in Hornsey did not help to deny the Tories a majority government one iota. A win in Hendon would have.

That’s elementary electoral maths. Of course, you can’t predict what is going to happen in each individual seat. But if you put zero effort into the Tory marginal and bust a gut winning the Lib Dem marginal, then it is hard to deny that you had rather skewed priorities. And this pattern seems to be reflected across the country, with Labour going all out in Lib Dem constituencies and just tinkering in Tory seats. Norwich is another clear example, with Labour failing to gain Norwich North whilst slugging it out with the Lib Dems and Greens in Norwich South.

Labour made a huge deal out of their doorstep operation at the start of the campaign. I suspect it may have been exaggerated, but assuming for a moment that it wasn’t, it’s clear they were marching on the wrong bloody doorsteps. Who was making these calls? Presumably the same person who commissioned that ridiculous pledge stone. Presumably the person who decided on those meaningless “pledges” which were carved onto the pledge stone.

Anyone who says that Miliband failed because he went back to the politics of Michael Foot deserves to have their head rammed against that blasted lump of rock. Because say what you like about Michael Foot, he’d never have lead a campaign which was based around six vague and meaningless pledges like those ones. And he certainly wouldn’t have dreamed of doing something as hubristic as engraving them anywhere. I mean seriously. Would Michael Foot have cribbed an abbreviated Tory campaign slogan from ten years ago like “Controls on Immigration”? If you’re going to blow a racist dog whistle, at least find one that isn’t so ineffectual.

The country didn’t turn to the Conservatives. Seriously, look at the results. Overall, they gained 0.8% of the share of the vote. Labour gained 1.5% of the vote share (if they hadn’t lost votes to the SNP in Scotland, they’d now be neck and neck). That the former shift gifted the Tories 23 more seats while the latter even larger positive shift cost Labour 26 seats isn’t just stupid; it’s morally repugnant.

The examples of how this voting system has denied the British public its voice are everywhere: the SNP winning 95% of the seats in Scotland with just 50% of the Scottish vote. The fact that the Tories have done virtually the same thing in the South of England. The fact that the SNP won 56 as many MPs as UKIP despite winning almost a third of their UK share of the vote (4.7% versus 12.6%).

The thing that seems to be giving some people pause for thought about electoral reform today is the prospect of it leading to a Conservative-UKIP coalition. That’s a hard bullet to dodge; all things being equal, it’s exactly what would have happened, albeit with the slenderest of majorities. However, it is also the case that all things wouldn’t have been equal. For one thing, the Greens would almost certainly have got more votes. For another, we wouldn’t have seen Tories voting tactically in the north for UKIP because their own party was a wasted vote. And UKIP’s own populist leftwing positioning would either force them into getting some concessions from the Tories or would have bitten them in the bum.

I’d go as far as to say that even a UKIP/Con coalition would be better than what we got for the simple reason that it would have included Conservative and UKIP MPs from across the UK. The “Maggie Simpsonification” of the UK would simply not have happened. Given the choice between a monolithic one party rightwing government with no representation north of the border and a wafer thin majority and a two party government rightwing government with some representation north of the border, I’d take the latter every time. 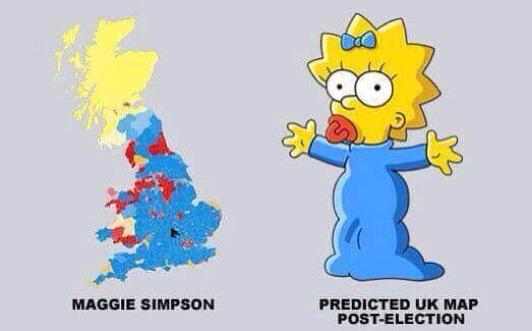 I would strongly urge you to sign this petition and get stuck into the campaign for voting reform in the UK.

There is nothing good about the Lib Dem humiliation. It’s no secret that I was no Nick Clegg fan. I didn’t quit the Lib Dems because of him, but he certainly wasn’t doing anything to keep me there. But I certainly don’t take any pleasure over what happened to them yesterday. They didn’t deserve it, and British politics is the worse for losing them. Hell, it’s the worse for losing the bloody Orange Bookers.

The dismay I’ve seen online in response to the prospect of a majority Tory government bears this out. The capacity for leftie magical thinking never ceases to amaze me. Somehow people can vote for a party that they no has zero chance of winning in a Lib Dem-Conservative marginal seat and still be dismayed when the Lib Dems get wiped out as if magical pixie voters were going to keep them elected so they didn’t have to. So many people who spent the last five years insisting that the Lib Dems made absolutely no difference in government seem to now be reeling off lists and lists of dreadful Tory policies which will now be implemented without the Lib Dems in the way to stop them.

Let’s be clear: yes, the fact of the coalition, the tuition fees “original sin” and Nick Clegg’s unpopularity were strategic dead albatrosses around their necks. Yes, they ran a dreadful, confused and negative campaign (at least the air war; I can’t comment about campaigns on the ground because I wasn’t there). But at the end of the day they lost in no small part due to a fit of pique by voters more concerned about their own political purity than stopping the Tories. That’s on them. It was on me when I did the same thing five years ago, so I know how it feels. I don’t condemn anyone for doing it – I understand the temptation – but I do expect them to accept responsibility for it.