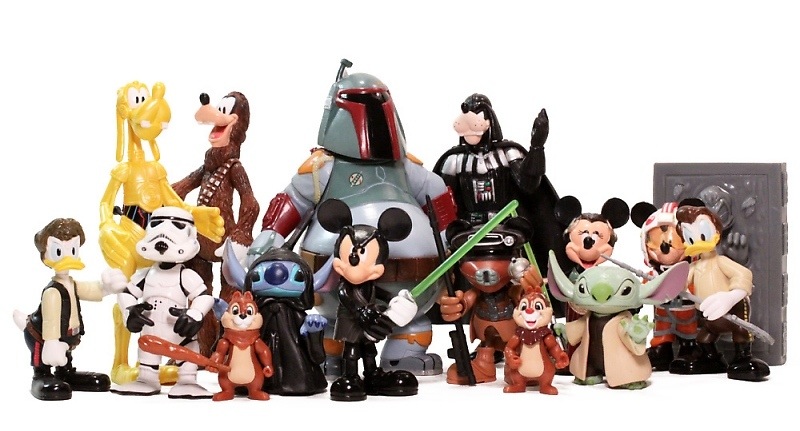 My initial shock of discovering that George Lucas has sold Lucasfilm to Disney has given way to contemplation about what a post-Lucas Star Wars universe might look like.

For many people this is bad news; it simply means more bad films cashing in on the goodwill of a dwindling generation of fans who are destined to be disappointed. Sometimes I think Star Wars fans have very selective memories, choosing to forget not only that Star Wars all but invented film related merchandising as we now understand it, but that they lapped it up as kids as well. Would either Empire or Jedi had been anything like as successful as the were if their prospective fan bases hadn’t spent the previous three years tirelessly playing with their action figures and dreaming about what might happen in the next sequel? I doubt it.

The prequels failed for several reasons: bad scripts, an over reliance on CGI, poor directing and poor continuity with episodes 4-6. Most of the problems can be laid at George Lucas’ own door. If he had recognised his limits and handed directorial duties to other people – precisely as he had done with both Empire and Jedi – we would almost certainly have ended up with better films. Both iterations of the Clone Wars animated series have been both superior to the prequels and felt more Star Wars-y and it cannot be a coincidence that Lucas has been for the most part at arm’s length from them.

But there’s a more fundamental problem, and that is that they were prequels. Prequels are inherently problematic because you always know how they’re going to end – and what might make for satisfying backstory will often fail to work as drama itself. So, for instance, Padme always was a doomed character and making her more interesting would have been problematic in terms of tying into the later episodes (which isn’t to say that pretty much anyone could have done a better job with her than Lucas managed). To make things worse, the episodic format meant that they were stuck with telling a linear story that couldn’t really reference anything which we knew was to come later (see the Godfather Part 2 for an example of how a less restricted prequel could work – I understand there’s a TV edit somewhere with the story of both Godfather films put in chronological order; it sounds like an utterly awful idea).

And finally, you have the problem that, more than 30 years ago, Lucas chose rather arbitrarily to make A New Hope episode 4. The series could have sustained one prequel – two at a push – but it is pretty hard to deny that there simply wasn’t enough story to sustain three films (this is one of the reasons why I personally feel that Attack of the Clones is a worse film than Phantom Menace, but I won’t get into that right now).

In short, the two biggest handicaps of episodes 1-3 – the fact they were prequels and George Lucas himself – will not apply to episodes 7-9. It is hard to imagine how they could in any way be worse. And we should also be a little fair here: I would regard Attack of the Clones at its worst to be light years (never mind parsecs) ahead of a film like the latest Total Recall or any of the Twilight films. The Harry Potter films at their best fall far short of episodes 4-6. So the idea that making new Star Wars films will lead to a new dark age of commercial cinema is simple nonsense.

So, with that out of the way, what are my hopes for episodes 7-9? Well, for starters, I’m hoping they’ll be a continuation of episodes 1-6, not just a sequel. For me that means two things: it has to be about this whole “balance of the force” thing, and it has to feature Anakin/Vader as a significant character. However tempting it might be to simply ignore episodes 1-3, ultimately the final three films have to reflect on the prequels’ ideas – especially if they are to be in keeping with Lucas’s idea about repeating motifs and themes throughout the films as if they form an overall symphony (I might not like Lucas’s execution, but I’ve always thought he had some great ideas behind his films).

I’m not terribly familiar with the Star Wars New Republic expanded universe beyond the Dark Empire comics – and since there’s so much of it (and since no one will buy me the encyclopaedias – I probably never will). Generally though, I think they should avoid adapting anything which might have been written before. I also think they ought to resist the temptation of featuring the cast of episodes 4-6 too heavily, leaving them instead as mentor figures. The focus should instead be on a new generation of Skywalkers/Solos.

I said it should reflect on the balance of the force. This prophecy was discussed a lot in episode 1 but was barely touched on in the later films, except (and my memory may be flakey here), when it is announced that the prophecy is clearly wrong because Anakin has turned to the dark side. But it has long been speculated that, in fact, the prophecy was true. Anakin brings balance in two ways: firstly in bringing down the Old Republic, which has become infantilised by its over reliance on the Jedi (and here, Ryan Britt’s recent article about illiteracy is particularly instructive) and secondly by being instrumental in bringing down the Emperor. So we’ve seen him redress the balance, but what we haven’t yet seen is him restore some modicum of equilibrium.

The agenda of episodes 7-9 therefore must surely be to recount how that equilibrium was eventually achieved. Possibly this means getting to the roots of the Sith-Jedi conflict (and even how the Mandalorians fit into that).

As for Anakin himself, both 3 film cycles thus far have focused on his life as a Jedi Knight and as a Sith Lord. Both cycles end on him transforming into something new. The Revenge of the Sith states at the end that the blue glowing “life after death” form that we see both Obi Wan, Yoda and Anakin eventually become is a relatively new innovation discovered by Qui Gon Jinn, but this is thrown in as an almost throwaway line. For me, the films have to ultimately be about how Anakin in this new incarnation somehow plays a decisive role in restoring this final equilibrium.

Anyway, that’s how I see the films developing. I may well find myself disappointed, but I’ve never really understood why Star Wars has been treated as a a sacrosanct film series which should have a finite number of films, while it seems fine for other franchises to continue to churn out sequels endlessly. If this move to Disney means slightly less reverence, the franchise can only benefit.

UPDATE: I also wrote this for Unlock Democracy today, about the parlous state of democracy in the Old Republic: Unlock the Galaxy.