One of the advantages of being effectively out of action for the past month is that because I haven’t been able to even attempt to cover the expenses row, blow-by-blow, I can now afford to take a somewhat wider view. It has been a fascinating couple of weeks, revealing not just how Parliament works but how the media does too.

Were the Telegraph right to publish these expenses details given the fact that they were due to be published this summer anyway? On balance, I’m afraid I think they were. To start with, I am deeply sceptical that the fees office had any intention of actually publishing in July. They’ve been buying time for literally years now and I have no doubt they would have sought even more time then. Secondly, it was clear that they were falling over themselves to be helpful to MPs with embarrassing claims they wanted to cover up. By fighting the FOI requests every step of the way, ultimately the Parliamentary authorities have made the problem worse. To that extent then, the House of Commons as collective body, deserves everything it is getting right now.

But the problem with the data being in the hands of a single newspaper is that everything we get is transmitted via its own idiosyncratic political position. And the problem with this being an example of chequebook journalism, as opposed to the investigative journalism of people like Heather Brooke, is that the paper has to make good on its investment – and that means extending the coverage and the ramping up the salaciousness of it as much as possible.

In terms of the Telegraph’s politics, it has always and always will be the Conservative Party in print. They couldn’t have got away with just publishing the Labour and Lib Dem expenses details, but it is interesting how they have portrayed the Tory ones. The types of claim broadly fit into three categories. The first, which the Labour MPs exposed tend to fit into, are about mortgages, “flipping” and capital gains. They played the system to make personal profit. The second, which the Conservative MPs exposed tend to fit into, are about moats, duck islands and country piles. Literally, they fit into a different class. The third, which the Lib Dem MPs exposed tend to fit into, are about using the system to get the odd perk, be it a trouser press, an orthopedic chair or a packet of chocolate Hob Nobs.

They category that has captured the public imagination has been the second one. Hogg’s moat has achieved iconic status within just a few days. Yet the Telegraph has conspiciously attempted to portray all three as morally equivalent at all times. It held off publishing the details of Tory MPs for as long as possible, meaning that when they were exposed, Labour had already been buffetted for the previous five days.

I happen to think the house flipping and profiteering is as bad as the showering of cash onto country estates, but the third category most certainly is not. There is no question that the Conservatives have an image problem here and the Telegraph and the Tory press have done all that they can to mitigate this. They have been falling over themselves to portray Cameron’s leadership on the issue as dynamic and forthright despite the fact that, when you look at it in detail, it turns out he isn’t particularly interested in reform at all. He insists that his richer MPs must buy themselves out of the hole they’ve dug themselves but is keen for MPs to be able to continue to profiteer via the ACA. He wants a snap general election, something which would have the effect of scapegoating a handful of MPs in marginal constituencies whilst giving the ones in safe seats renewed terms of office.

A general election now, with the Tories still insisting that (aside from a bit of fiddling), the status quo must prevail, would be a white wash. Yet this is the Telegraph line, too. Fortunately, the Telegraph can’t entirely have its own way and the debacle has revived calls for real democratic reform. It may yet turn out that they have created a monster that they can’t actually control. We can hope.

But the other side that irritates me is the salaciousness of it all. It has started to stop resembling journalism and to start looking somewhat more like expenses porn, designed to titilate rather than inform. What has developed out of this debate over the past couple of weeks is a mood that any expense claim is bad. This is deeply pernicious. Clearly an inner London MP does not need to furnish a second home, but an MP representing a constituency further afield must (this is one of the reasons why I’m sceptical of the calls to scrap the expenses system altogether and replace it with an increased salary – great if you are a single man and have no real intention of representing your constituents, hard cheese if you aren’t). Are we really going to get precious about someone having a telly in their second home? The agenda of the Telegraph has been to convince you that yes, yes you should.

And finally, there is the innuendo. This is the single worst aspect of the Telegraph coverage. Many of the stories over the past couple of weeks have been rooted in the fact that the Telegraph have been able to get away with “X submitted a receipt which included Y” – thus implying that X claimed for Y whilst knowing that if they did say that they would be open to libel. Yet the suggestion is out there and before you can blink, half a dozen other media agencies are repeating the claim as a matter of public record. A lot of the stories they have covered have turned out to reveal nothing more than minor errors in paperwork, but that hasn’t stopped them from smearing everyone with the same brush. 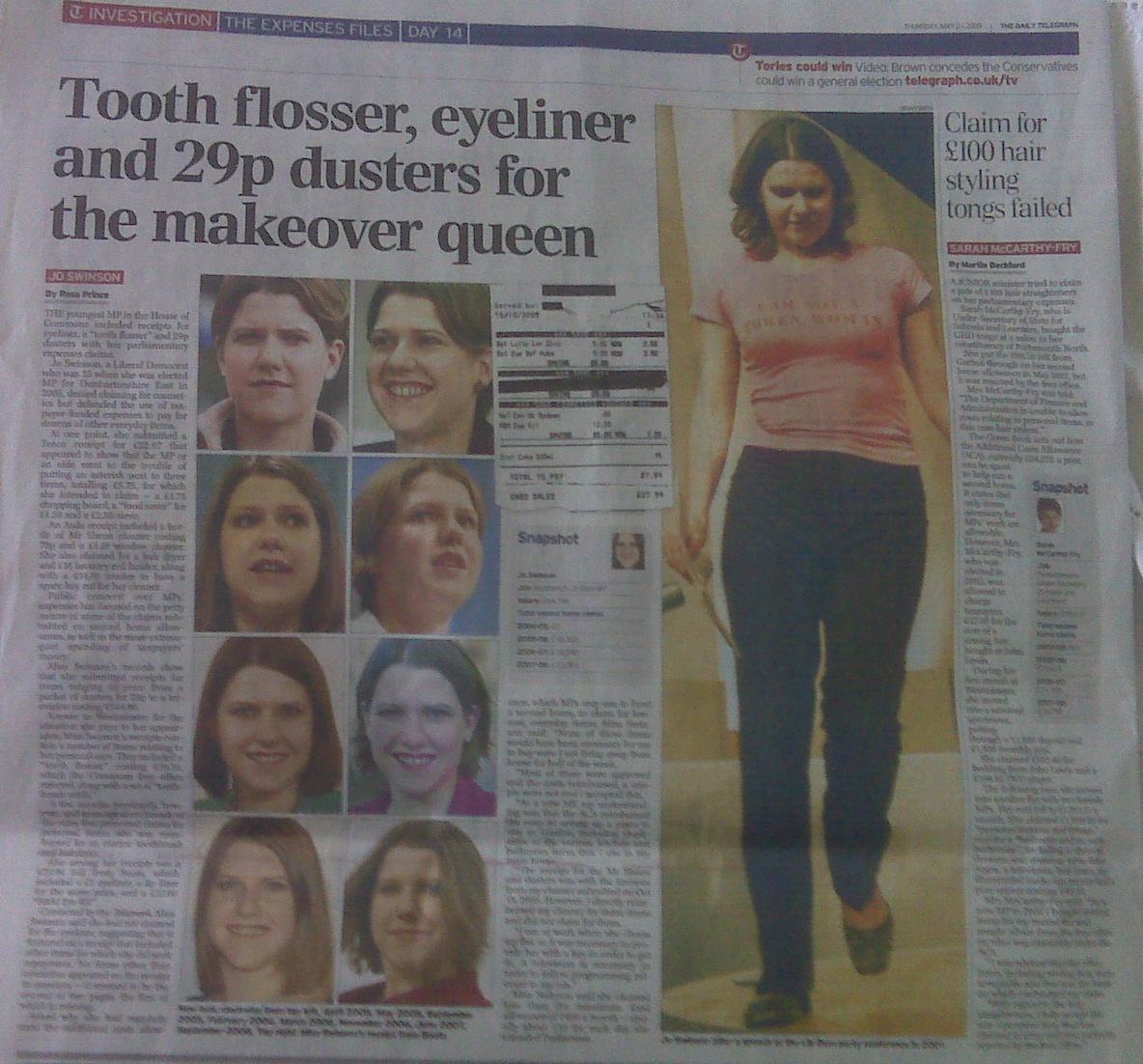 The single worst example of the Telegraph coverage can be found in their story about Jo Swinson this week (declaration: Jo is a friend of mine, but I don’t accept this makes a word of what I have to say any less true). The online version of this story has been sanitised by the online editors, who were presumably too ashamed to publish the print version unchanged. The print version has the headline: “Tooth flosser, eyeliner and 29p dusters for the makeover queen” and contains no less than nine seperate photographs of Jo taken at various stages over the last eight years.

There are so many dreadful aspects of this story, I don’t know where to start. Let’s start with the misogyny. What Jo is being attacked for here is for wearing makeup. The epithet “makeover queen” implies someone who has had a lot of makeovers, yet Jo has never appeared in one of those articles about MPs getting glammed up or anything like that and doesn’t do the daytime television circuit. The article states that Jo is “known in Westminster for the attention she pays to her appearance” yet I can find no media story which has remarked on this before this piece. Google “Jo Swinson” and what you find are lots of stories about her campaigns against excessive packaging, winning local constituency battles such as the one to stop a new prison being named after one of her local towns and the leading role she has played in fighting for Parliament to be more accessible and transparent. Is she a slob? Hardly, but since when did not being one become worthy of criticism?

Secondly, the article is complete, unmitigated bollocks from beginning to end. Read it closely and you will find that the Telegraph isn’t stating she claimed for an eyeliner or feather dusters, merely suggesting that she might have done. There is an irony there in that if Jo had not issued them with as full a statement to act as a counter-balance, their legal team might have blocked the story on the grounds that it would have been clearly defamatory. This paragraph is particularly revealing: 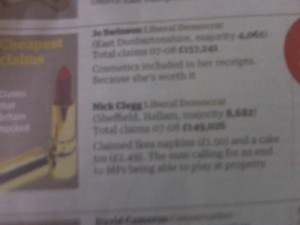 Jo has of course rebutted all this, but that hasn’t prevented other media outlets from reporting it as fact, including the BBC (the cost of Jo’s makeup might not come out of your pocket, but the cost of repeating bullshit claims about her most certainly does – they can’t even be bothered to get her photo right) and the Guardian (in print but again, not online – funny how newpapers are afraid to put their misogynist crap on the web for all to see).

After a fortnight, this story has mutated from one about ministers playing the housing market at taxpayer expense to barefaced sexist lies being spread about one of the Commons’ champions of reform and transparency. Yes, the Telegraph have done democracy a service by breaking this story but never forget that they ultimately represent the forces of darkness.

UPDATE: I’ve written letters of complaint to the Telegraph, the BBC and the Guardian and would urge you to do the same.

8 thoughts on “Parliament, The Telegraph and Jo Swinson”