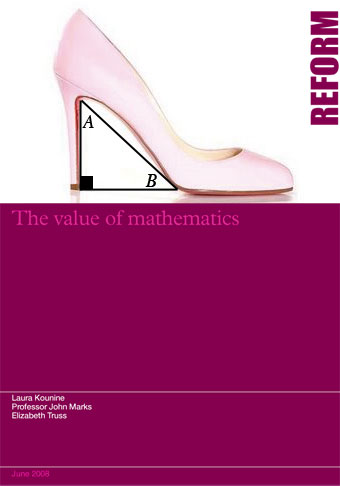 Reform is an interesting think tank. They claim to be non-partisan and solely interested in the neutral pursuit of “a better way to deliver public services and economic prosperity” yet in reality have a tendency to favour reforms which involve a reduced role for the state and are not at all surprisingly firmly on the Conservative end of the spectrum. Their token Labour and Lib Dem sponsors, Frank Field and Jeremy Browne respectively, do little to confound their reputation for having a rightward inclination.

All of which makes their latest publication all the more perplexing. I’ve read the press release and executive summary of The Value of Mathematics (PDF) and it seems a little confused. I’m not an educationalist and am not qualified to answer their criticisms of how maths is taught in school. What I can say is that with the best will in the world, Gordon Brown can hardly be blamed for it. So why all the smirking innuendo about “Gordian knots”? The legend of the Gordian Knot is not famed for is association with mathematics as far as I know (although I am grateful to wikipedia for leading me to this article, which hardly undermines my point), nor is mathematics teaching a particularly intractable problem. And is Alexander’s solution – effectively smash and grab – sound like the sort of solution that is really needed? Alexander didn’t cut the knot in order to make people free; he did it to rule the fucking world! The closer you look at it, the worse a metaphor it turns out to be.

Perhaps if Reform was more interested in Phrygia than Prada they would have appreciated this, but clearly knowledge isn’t actually something they have much time for, as this quote from Elizabeth Truss reveals:

â€œIn todayâ€™s Britain it is acceptable to say that you canâ€™t do maths, whereas people would be ashamed to admit they couldnâ€™t read. We need a cultural revolution to transform maths from geek to chic.”

This quote highlights two conceptual fallacies within this report. The first is to equate the lack of people taking mathematics to an advanced level with innumeracy. Getting less than a C in GCSE maths doesn’t make you innumerate and more than getting less than a C in English makes you illiterate. It is a crucial distinction if the problem you purport to be identifying is a lack of scientists, engineers and statisticians rather than the poor quality of supermarket cashiers.

If the problem is the latter, and in fairness it should be pointed out that the report does briefly reflect on this (albeit it only to the extent that it quotes one of those surveys where businesses get the chance to whinge with no actual empirical data to back it up) then you have to take a number of remedial steps. That lead to the sort of policies Labour came out with in the late nineties. Fundamentally, it is a primary education issue more than it is a secondary education issue. Improving maths GCSE is a bit of an irrelevance in this respect.

That isn’t the problem that the report is mainly concerned with however, and it is highly doubtful that the UK would be a happier, more prosperous place if every person in the street could do complex algebra. Indeed, it could be argued that we would be better off if fewer people were doing maths at Key Stage 4. If there is a problem, it appears to lie in the fact that people who are good at maths are not fulfilling their potential and that there is a general cultural problem where intelligence is undervalued in a society obsessed with image and bling.

This leads me directly to the other conceptual problem. What’s all this guff about transforming maths from “geek” to “chic” (the report repeats this phrase throughout)? My favourite line in the report has to be this:

The many people who enjoy Sudoku, logic problems and computer games highlight the considerable potential interest in mathematics.

No it doesn’t. At all. Whether the two are linked is another matter, but interest in computer games has risen at an inverse proportion to interest in mathematics. Neither them, nor Sudoku and other logic problems are about maths at all, any more than crosswords and cinema are about English literature. None of them are “chic” – all of them are “geek” – yet they’re still popular. Doesn’t that suggest they just aren’t getting it?

Will our problems really be solved if only they talked about Pythagorean equations in Sex and the City with the same enthusiasm that they talk about handbags? Maths has always been “geek” and always will. Trying to fool kids into thinking it is somehow hip and happening isn’t going to solve anything. The problem isn’t Stephen Hawking and the solution most definitely isn’t Victoria Beckham.

Chic is the problem; in a world which celebrates superficiality and shallowness any vocation which requires a bit of brain power is going to struggle. Maybe if people like Elizabeth Truss, a Cameroon A-lister, weren’t so down on “geek”, we wouldn’t be in this mess.

I’m sorry to bang home the point, but it does suggest an inherent confusion. You simply cannot with one hand dismiss attempts to make maths “relevant” while calling for it to be made “chic” with the other. To do so is utterly fatuous.

It wouldn’t be quite so bad if, despite this being one of the paper’s main conclusions, they actually spelt out how this would be achieved. On substance however, the only thing the paper is willing to say about how to make maths “chic” is to have more “rigour” and more things like the UK Maths Challenge. They call for less state control while simultaneously demanding that the government “steps in” to halt the “current inexorable drift” towards modularising maths GCSE. All of this sounds like more state control to me, not less.

This is the other problem with the paper; in calling for less state control, it lacks the courage of its convictions. Outside of the Department for Children, Schools and Families I don’t think anyone fails to recognise that “teaching to the test” is doing anything but harm. But at the same time, they can’t help having a pop at “the misguided trend towards ‘progressive’ teaching.” But you can’t have it both ways. It wasn’t Thatcher who insisted on “progressive” maths teaching in the early 80s, it was the teaching profession. It is my experience that in areas such as the national curriculum, politicians tend to defer authority to civil servants and “experts” with remarkable consistency regardless of political ideology. It is those “progressive” experts who seem to be behind the “inexorable drift” that they are so opposed to. And if we are all to be much freer in choosing which schools our kids go to, a great many of us are likely to opt for ones with “progressive” attitudes.

The answer to that, surely, is that enabling greater experimentation will mean that best practice can evolve organically. No-one should be under any illusions however that giving teachers more power over their own jobs, and parents’ more power over where to send their kids to school is going to magically result in better teaching automatically. Nor are parents or even teachers going to put the interests of the national economy at their top priority. Many parents will pick schools on the basis of what religious ethos (or lack thereof) they adhere to. Many will opt for ultra-progressive education methods such as Summerhill‘s. China does a great job at hothousing mathematicians, yet somehow I suspect Reform would have issues with their education system.

There’s actually very little in this report which is about less control; merely bad teaching. That’s fine, but you can’t have it both ways. You can’t conflate the one with the other. Liberalising education is a big, radical step. Pretending that doing so will lead to all schools adopting the same teaching methods is a fantasy. You have to take the rough with the smooth. Yet this isn’t the first time I’ve seen Conservatives equate less state control with a rejection of “progressive” education and the problem they identify stemmed from the Thatcher and Major administration. Both these facts cast significant doubt over whether Tories really do get liberalisation.

Government certainly must share some of the blame, but it is important not to ignore the wider social pressures. Learning has always been uncool and it is foolish to pretend you can somehow make it so. A celebrity and vanity-obsessed culture is always going to under-value science and mathematics and any look at maths teaching in this country needs to reflect on that. Yet of course it is those cultural values that Cameron, and Blair before him, has capitalised on. After the London elections we now know what a real electoral force those values can be. So it is hardly surprising that a Cameroon report of this type is going to present those trends as a solution rather than a problem, no matter how foolish this appears to be.