I’m in the odd situation of having a vote in the Labour leadership elections via my union, but having much more interest in the Lib Dem contest (and no vote). A lot of this is because I know the players individually, but at least part of it is because the debate isn’t being framed in the depressing and soul-destroying way the Labour one is. Are they really going to spend the next three months arguing about Tony Blair, how much they hate poor people and how much they love rich people? Save me.

The Lib Dem discussion is much more positive. Up to a point. Thus far, I’ve seen them obsessing too much over policy, which isn’t going to be decided in this election, and largely ignoring strategy, which is the main issue that will be decided. I’ve heard much more about strategy from Farron than Lamb, and that’s to his credit. But he hasn’t fully addressed my concerns from four years ago about his take on organisation (he has to some extent with his talk of learning lessons from groups from 38 Degrees); and significantly, his grand vision of reviving community politics didn’t actually come to much, and I’d like to hear him account for that as well.

But at least he’s talking about it. I’ve heard significantly less about organisation from Norman Lamb, and that’s troubling because the party he hopes to take over is going to have some crucial organisational tasks ahead of it.

There’s been a subtle but persistent campaign from Lamb supporters to attack Tim Farron on policy grounds. They like to post articles on their social media pages about how you can’t trust him because he abstained in certain votes in the House of Commons on same sex marriage, and his wobbliness on assisted dying. All of this is wrapped in a crucifix-shaped bow. Because, ahem, you know, he’s a Christian (nudge nudge, wink wink). Speaking as a pretty anti-clerical atheist, I find that somewhat distasteful.

This goes hand in hand with an emphasis on what a great, or indeed true liberal Norman Lamb is: 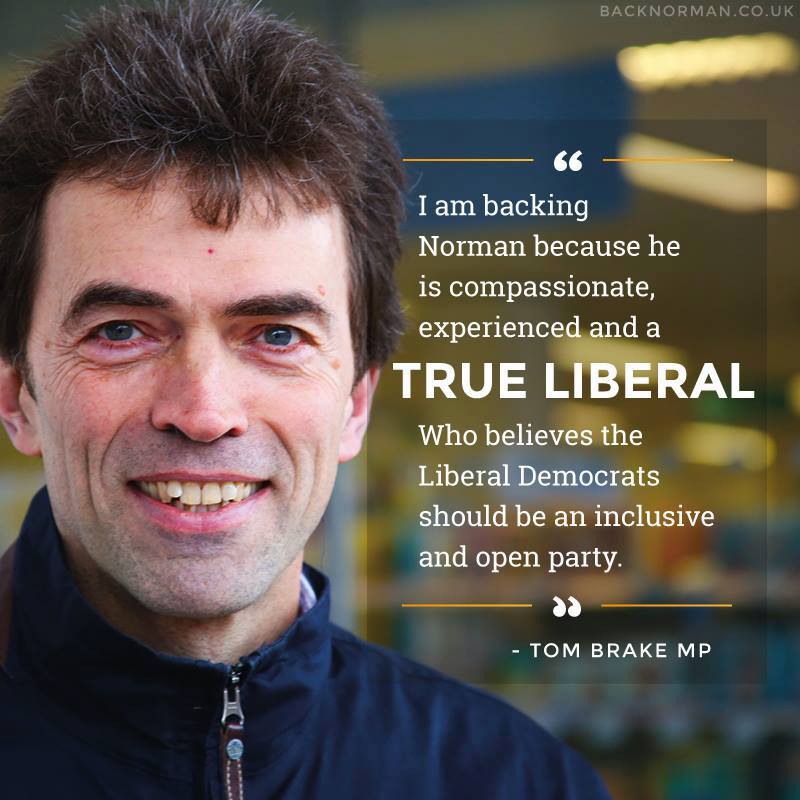 The term “true liberal” brings me out in hives. There is of course the implication that Tim Farron fails some kind of purity test; attacking a Christian for failing to have the right values is almost too ironic for words. But there is also the sense that this is a continuation of the ruinous direction the Lib Dems have gone over the past 8 years.

People have rightly been praising Charles Kennedy’s legacy over the past week. It’s refreshing to hear, because under Nick Clegg’s leadership, we had a steady trickle of articles and comments implying that Kennedy had achieved nothing but corrupt the Lib Dems from its true purpose. Indeed, Richard Reeves famously called on social democrats and social liberals to leave the party and join Labour; far from distancing himself from this proposal, Clegg would go on to make him his Director of Strategy for the first two years as Deputy Prime Minister.

For years the senior party line informed us the history of Lib Dem philosophical thought was this: a century of unbroken tradition in the vein of Mill and Gladstone; something something welfare state (shrug); 20 years of social democrat muddle and confusion following the party merger in 1987; a return to our liberal roots with Nick Clegg’s election in 2007.

In fact, the intellectual schism happened almost a century earlier; whatever your views on Gladstone, he would never have had any truck with the 1908 People’s Budget. As the Liberals struggled with how to respond to the rise of Labour, they went on to spend decades locked in ideological debates between the “new” (social) liberals and classical liberals (who, to make things more confusing, are often regarded these days as “neoliberals” or describe themselves as “socially liberal, fiscally conservative”; so much for terminology). This sort of, kind of ended when the National Liberals split in 1931 and slowly merged into the Conservative Party. Obviously, you can’t sum up the entirety of Liberal history in a sentence, but the attempt to paint “social democracy”, which all too often was used as code for our proud social liberal heritage, as an alien and recent intrusion was one of the more disturbing aspects of the Clegg era.

When I see talk of “true liberalism,” I see a continuation of this trend. Liberalism is a broad and messy philosophy, in which often there is no absolute right answer. A “true liberal” appears to work on the premise that this isn’t the case. I’ve learned to deeply distrust “true liberals”. In saying this, I’m aware that I’m open to charges of hypocrisy, given that I’ve argued in the past that the Lib Dems have cast the ideological net too wide in embracing classical liberals alongside social liberals; but it is because I accept that it is a broad philosophy that I reject the notion that there can be such a thing as “true liberalism”. By all means argue that the party should have a narrower ideological base, but doing it from the position of there being only “one true way” is just going to get you into inward-facing ideological rows.

This isn’t just a philosophical debate; it goes to the heart of the direction the party is likely to take. Farron apparently fails the purity test when it comes to same sex marriage. I have to admit that I too probably fail this test. I’d have almost certainly voted for it – just look at who was against it – but I’m ambivalent about state-institutionalised marriage in general (which doesn’t seem very liberal to me) and I’m very alert to a disquiet amongst some of my queer friends about the presumption that the only way their relationships can be viewed as equal is if they adopt a hetero-normative standard. But the biggest reason why I feel a little ambivalent about this policy, which Lib Dems are keen to trumpet as one of their achievements in government, is that prior to the draft bill being published, a senior Lib Dem told me that the party’s support for Tory benefit cuts was part of a deal, with them getting same sex marriage in exchange.

It isn’t that I’m some naive fool who was unaware that the coalition partners did policy deals while in power; it’s the nature of this particular deal. Was that really an exchange in which liberalism was the victor? Gay rights are important, but more so than the poorest and most vulnerable in society? More to the point, some of the most vulnerable people living on the poverty line are young queer people. Was it right to limit access to benefits for poor, vulnerable queer people in exchange for expanding the rights of (all things being equal), more affluent, middle class queer people?

The honest answer to that is, “I don’t know”. It’s complicated; not least of all because the symbolism of the same sex marriage legislation was so significant. My reason for mentioning this anecdote is less about the decision itself, which was almost certainly more complicated than just “cuts versus same sex marriage” in reality, but the cut and dried answer I got from the aforementioned senior Lib Dem. For him, it was simple. For many Lib Dems, it is equally black and white. It’s pretty clear to me that that isn’t the case with Tim Farron; is it with Norman Lamb?

Clegg had a simple answer to every problem. He couldn’t have adopted the phrase “there is no alternative” as his personal mantra more if he had had it tattooed on his forehead. If he was ever burdened with self-doubt, he was excellent at getting over it lightning fast. He surrounded himself with people who shared his world view and he confidently strode forward, completely assured that he was wholly and completely right. And yet it turned out he was wrong. Repeatedly.

Norman Lamb seems keen to present himself in the same mould and to be fair it is likely to be popular, especially in the Lib Dems who, if you’ve ever been to a party conference, you can attest love their heroes. But I wonder if that combination of narrow ideological purity and “steady as she goes” self-confidence is really what the party needs right now.

None of this is to suggest that Norman Lamb as leader would turn out that way; he doesn’t strike me as Nick Clegg Mark Two at all personally. That’s part of the reason why I find his campaign so alienating. As the party’s champion of mental health issues, he surely understands better than most how self-doubt shouldn’t be treated as weakness; to live with depression and anxiety is to live with one big ideological grey area – “true liberals” need not apply. I’m confident that there’s a less self-righteous candidate lurking under his campaign’s veneer; I just wish he showed it a little more.