While Judge Death is a relatively well known Dredd antagonist with certain basic flaws, Judge Jura Edgar is an example of a less known antagonist who is done to perfection. Edgar was, for 22 years, the head of the Justice Department’s Public Surveillance Unit – a division which specialises in spying on the populace.

The Public Surveillance Unit (PSU) is used in several stories to explore the growing trend for universal surveillance in daily life but the obsessive, secretive and downright paranoid Edgar is more like a figure out of the Cold War. Part George Smiley, part Margaret Thatcher (artist John Burns clearly modelled her on the former Prime Minister) and, yes, part J. Edgar Hoover, she embroils Dredd in a number of intrigues, including holding out the possibility that Dredd may not be a clone of Fargo but actually his son (The Cal Files, progs 959-963, 1995). After her introduction, Dredd and Edgar rapidly fall out and Edgar becomes obsessed with bringing about his downfall, eventually using a partial account of Galen DeMarco‘s romantic proposition to Dredd as a pretext to discredit him (The Scorpion Dance, progs 1125-1132, 1998-1999). This fails, but so too does an attempt by Dredd’s allies – including then newly instated Chief Judge Hershey – to convict her with criminal charges for secretly keeping sensitive information on senior judges. Despite this, Hershey removes her from the head of the PSU and transfers her to head a penal colony in the Cursed Earth (The Cal Legacy, progs 1178-1179, 2000).

Years later, with Edgar dying, she attempts her final revenge on Dredd and Hershey. She passes Dredd information about the Citizen’s Court, an illegal execution squad set up by a small group of judges in the 2090s. As per her plans, the surviving members of the squad attempt to kill Dredd as he carries out his investigation, but fail. The final twist however is that it emerges that Edgar herself was the ringleader of the Citizen’s Court – which is how she knew about it – but by the time Dredd returns to her penal colony to bring her to justice, she has died (The Edgar Case, progs 1589-1595, 2008).

While there are probably not enough of them, the Dredd strip has a fairly good track record in producing strong female characters, albeit with an occasional tendency to lapse into cheesecake (Anderson and DeMarco in particular appear to have managed to get the artists and editors into a lather). Edgar is relatively unique in being a female character where her gender is not made an issue of at all (the handling of McGruder, Hershey and Beeny is also quite strong, although the former tends to be presented as a crone while Hershey has had her cheesecake moments – particularly in her younger days). She has a character arc and was thankfully not overused.

She also marks a distinct change in John Wagner’s writing style. Between Necropolis and the Cal Files, Wagner had only written a handful of Dredd tales, including the arc which was kicked off by Mechanismo and ended with the Wilderlands. The rest of the writing duties particularly in 2000AD (Wagner and Grant mainly wrote for the Judge Dredd Megazine at the time) were handled by Garth Ennis, Mark Millar and Millar’s then occasional writing partner Grant Morrisson. None of these writers really “got” Dredd; Millar and Morrison never really got past the fascist overtones, while Ennis seemed to simply run out of ideas quite quickly.

It is fair to say however that even Wagner’s Mechanismo – Wilderlands arc failed to really catch fire. It had any brilliant ideas within it but ended up less than the sum of its parts. Throughout the first half of the 90s, it really did feel as if Dredd was in terminal decline.

Ironically, it seemed to be the prospect of a film which in retrospect is widely regarded as a failure which appeared to turn things around. With The Cal Files, Wagner changed the whole tone of the strip from action-adventure to something more akin to police-procedural thriller.

It might seem obvious for a strip about a future cop to borrow from police TV shows, but at the time the change in tone seemed quite extraordinary. The Cal Files was immediately followed by The Pit and eventually lead to Wagner changing the style of the whole strip, expanding and deepening the supporting cast, focusing on cases rather than just shooting things and ramping up the political intrigue.

The bottom line was that after 20 years, we’d all grown up and needed a bit more from Dredd than zany fashions and future crime. John Wagner realised this and responded at pretty much exactly the right time.

E is also for… 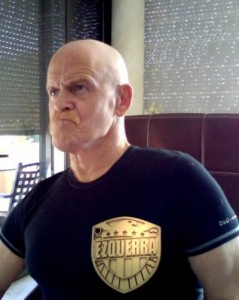 I’ve written quite a bit about John Wagner thus far but failed to write about his co-creator, Carlos Ezquerra.

Spanish born, Andorra (via Croydon) based Ezquerra was a celebrated artist in the 70s even before 2000AD was first published, mostly due to his work on Action and Battle. Chosen by editor Pat Mills to design Dredd, he developed the leather biker look quite quickly (while Wagner may have had half an eye of the Dirty Harry films, Ezquerra had been watching Roger Corman’s 1975 film Death Race 2000). But it was arguably his city scape designs that really elevated the project to a new level. Up until that point, the idea had been to set Judge Dredd in a future version of New York; it was Carlos Ezquerra who created the deranged vision of Mega City 1, with a cityscape that more resembles a series of giant termite mounds than high rise buildings.

Ezquerra however grew disenchanted with the development process of Judge Dredd and eventually peeled away. He was further put out by the fact that his replacement, Mick McMahon, was extremely good at copying his style – although he very rapidly developed a style which was unique to himself.

Ezquerra was to walk away, instead focusing on developing Strontium Dog for 2000AD’s sister publication Starlord (also in collaboration with John Wagner). He didn’t return to the strip for five years but when he did, his illustration of The Apocalypse War (progs 245–267, 269–270, 1982) was magnificent. The character design had developed significantly since he had left the project, but he instantly made it his own.

Ezquerra has subsequently become established as one of the main Dredd artists. He is the only artist other than Ian Gibson to have worked on the character in every decade since it’s creation and while Gibson is limited to the odd 6-pager these days, Ezquerra’s work rate remains extraordinarily high, albeit with the help of his son Hector. He remains active despite being treated for lung cancer in 2010.