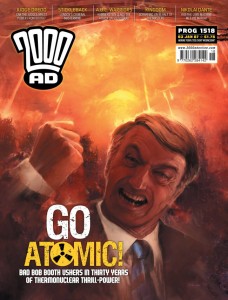 Robert L. Booth – aka “Bad” Bob Booth – is, in Dredd continuity, the last president of the United States of America. Following a disastrous global nuclear war, he was overthrown by the Supreme Court, which invoked the Declaration of Independence:

But when a long train of abuses and usurpations, pursuing invariably the same Object evinces a design to reduce them under absolute Despotism, it is their right, it is their duty, to throw off such Government, and to provide new Guards for their future security.

Booth is not executed but, rather, held in suspended animation, which is how he manages to be not just a key historical figure but, eventually, a key antagonist.

Booth has only appeared three times in the series, once in a flashback (The Hunting Party: Fog on the Eerie, progs 1037–1040, 1997). His first appearance was in the Cursed Earth (progs 61-85, 1978), the first bona fide Judge Dredd epic. Written by Dredd’s first editor, Pat Mills, the Cursed Earth is important in several respects, not least of all because it established a number of aspects about the strip’s pre-history which have gone on to become central to numerous stories ever since.

Although Booth’s shadow falls across the entirety of the Cursed Earth (after all, the nuclear wasteland it is set in was created as a direct result of Booth’s policies and actions, and it concludes with Dredd fighting off Booth’s robot army), he only appears fleetingly. Kept in suspended animation in Fort Knox, the life support system has begun to malfunction and the robots in charge of ensuring he survive start preying on the local populace to keep him alive. Discovering this, Dredd decides to revive Booth and put him to work for the townsfolk.

At the time the Cursed Earth was published, both Dredd’s creators had an ambivalent relationship to the strip. Although John Wagner was still writing the strip, both he and Carlos Ezquerra were focused on making Strontium Dog a success for 2000AD’s short-lived sister publication Starlord. It is a tribute therefore to Pat Mills that, 30 years later, they both came up with Origins (progs 1505-1519, 1529-1535, 2006-2007). In many ways Origins is a direct sequel to the Cursed Earth, filling in the history (from Dredd’s personal perspective) and also set in the nuclear wasteland that is all that is left of central North America. And of course this is where Bob Booth makes his second significant appearance.

Origins revolves around the revelation that the body of former Chief Judge Fargo, the founder of the Judicial system and Dredd’s clone-father, has been found in the Cursed Earth and is being held for ransom. Unknown to all but a few, Fargo had not died in 2051, but had in fact been kept alive and kept in suspended animation. With the possibility that Fargo is still alive, Dredd is given the task of recovering him and, over the course of the story, reveals to his team of Judges the secret history of the Justice Department. Eventually it emerges that the body is in the possession of Booth himself, who is revealed as the leader of the New Mutants Army, a growing force in the Cursed Earth. Dredd defeats Booth, destroys the army and recovers Fargo.

It is interesting to note how the portrayal of Booth changes between the two series. While it is not spelt out, it is implied in the Cursed Earth that Booth is something of an incompetent. When he appears, he rather resembles Jimmy Carter (Carter himself appears in the Cursed Earth rather improbably as one of the faces on Mount Rushmore). By contrast, the portrayal of Booth in Origins borrows more than a little from George W. Bush. 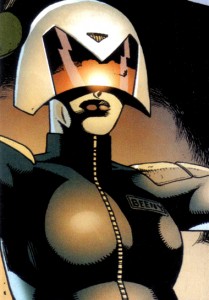 It is highly appropriate to write about Judge America Beeny in the same article as Bob Booth because in many respects the two characters neatly summarise the past and future of the Dredd strip. As you will know from reading my entry for A, Beeny is the daughter of America Jura and Bennett Beeny. First appearing in America II: Fading of the Light (Judge Dredd Megazine vol 3, 20-25, 1996) as a small child, that story concludes discordantly with her father dead and her being inducted into the Academy of Law.

Skip forward 10 years and Beeny reappears in America III: Cadet (JDM 250-252, 2006). Dredd tests her ability and commitment to the Justice Department by assessing her investigation into her father’s death. She passes the test and impresses Dredd sufficiently that after graduating from the Academy, she becomes a core member of the Dredd supporting cast and one of his most trusted colleagues.

How are Beeny and Booth connected? Well, Booth is quite literally the justification for the Judicial system which Dredd has sworn to uphold. The America stories which comprise Beeny’s origin represent a refutation of that system, explaining how the system works against the interests of ordinary citizens. Beeny herself is a reformer, but is committed to working within the system.

Dredd himself has flirted with the idea of reform himself. In the past, he has become so disillusioned with the system that he actually resigned and took the Long Walk (a self-imposed exile into the Cursed Earth), which eventually leads to the Necropolis storyline (progs 674–699) and a referendum on whether or not to restore democracy (democracy loses). Origins, in which Dredd discovers he has mutant relatives and is told by a dying Fargo that the system has failed, forces him to again re-evaluate his position. In this he finds a core ally in Beeny, another exile (this time not self-imposed) and the events which lead to the Tour of Duty storyline (progs 1650 – 1693, 2009-2010).

Without wanting to go into too much detail at this stage, in summary, Origins marks the end of an era for the Dredd strip. Ever since then, Wagner has been slowly but surely picking the world he created apart. The apex of this thus far has been the recent Day of Chaos storyline (progs 1743–1789, 2011-2012) in which the vast majority of the city’s population has been wiped out and the judges’ reputation is in tatters. Beeny represents the generation of judges that will inherit this brave new world. Left distraught at the end of Day of Chaos, I get the impression her story is not over yet.

B is also for… 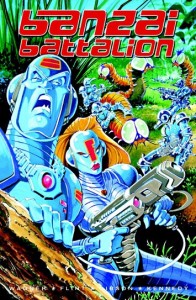 Banzai Battalion
A team of tiny gardening robots who talk and act as if they are in a World War II film who end up foiling a number of crimes and being recruited by the Justice Department. 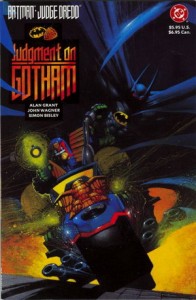 Batman
There have been four Judge Dredd – Batman crossovers to date, the most critically acclaimed of which was the first, Judgement on Gotham (1991), written by John Wagner and Alan Grant and illustrated by Simon Bisley, in which Judge Death escapes to the DC Universe, teams up with the Scarecrow, and Dredd, Anderson and Batman work together to stop them. A sequel, Die Laughing (1998) – in which the Dark Judges team up with the Joker – was commissioned to coincide with the release of the Judge Dredd motion picture but original artist Glenn Fabry ended up taking so long to paint the story that The Ultimate Riddle (1995) was commissioned to fill the gap. Featuring the Riddler, it also coincided with the release of the film Batman Forever (in which Jim Carrey played the Riddler).

A personal favourite however is Vengeance on Gotham (1993), which featured Batman villain The Ventriloquist, originally created by Wagner and Grant. 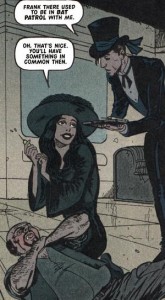 Oola Blint
A mass murderer, also known as the “Angel of Mercy” who would go door to door euthanising her unwilling neighbours. She was a recurring character in the late 90s and early 00s.