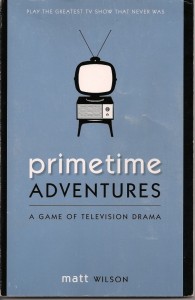 Smallville RPG is one of the games that lead me to discovering the wonderful world of more collaborative, story based kinds of roleplaying. Not a fan of the TV show (beyond the first couple of seasons), I was interested in its different approach to gaming and the way it incorporated TV tropes and conventions into the game itself.

Reading about Smallville online, I kept seeing it compared to Primetime Adventures, an earlier game with a similar philosophy. But all I could find about it was the publisher’s website promising a new edition of the game in “2011“. Then, on Friday, I discovered you could still get the second edition, published in 2005, on Indie Press Revolution. I snapped it up (alongside a couple of other games) and read through it. Here are my first impressions.

Whereas it is clear that you can use Smallville to play pretty much any kind of Smallville type TV show such as Roswell or Buffy the Vampire Slayer, Primetime Adventures promises even more scope: Battlestar Galactica to the Gilmore Girls and Desperate Housewives and everywhere in between. The reason it can promise so much is that the system is so simple. Characters are, for the most part, summed up by a handful of descriptive words. The only “stats” used in the game are the “budget” (a pool of points that the gamemaster – or rather the “producer” – can draw on throughout the game to provide a challenge for the players), “fan mail” (a pool of points which players accrue in the course of play for good roleplaying) and “screen presence” (a number between 1 and 3 which determines how central each player character is to the plot of any given episode – these rotate so that a different character gets the spotlight in each episode).

The game mechanic to determine whether Wash manages to outfly and escape the fleet of Reaver spaceships is essentially the same as the one used to determine whether Cordelia wins that slanging match against her rival at high school: combine your screen presence with your traits, add any fan mail and see if you can beat the score which the producer gets, which itself is based on the amount of budget he allocates to that test. Instead of rolling dice, the players all draw playing cards: for each red card you draw, you get one point.

That’s pretty much it as far as the system goes – not quite the simplest game system ever devised, but certainly pretty close (contrast that with the Smallville system which, while it looks like fun, I still find a bit baffling in places without having given it a go). I have a slight concern that in practice it might be too simple in certain places. While I really like its mechanism for changing the focus of the series from episode to episode, and quite like the rules to playing a scene, the rules for how an episode should work seem a little light. I have concerns about how you maintain momentum throughout an episode and ensure you hit the right dramatic beats. The rule book itself has quite an interesting section on how acts work in a standard four act TV episode format, but I was slightly disappointed that it didn’t provide a system for how this might work in practice. I wonder if you couldn’t have a rule whereby you should move on to the next act after a certain amount of the budget has been spent, to ensure the game stays pacy.

For a game that discourages pre-game preparation in favour of collaboration and improvisation, a mechanism for helping the players out with ideas for plot twists and complications would have been nice (a bit like the Fiasco tilt system) – especially given the fact that by using the core mechanic of playing cards you have a very simple system for randomly generating 52 different options right in front of you.

Some clarification and expansion would also have been helpful. What should the producer do, for example, if a character leaps out of an aeroplane without a parachute with the intention of catching up with the bad guy and stealing his? In this case, if the character fails he will die (assuming the setting is at least semi-realistic and a dimensional portal wouldn’t fit the genre), so does that mean it should be assumed that he will automatically succeed? If not, what should happen if the character fails (which is possible even if the producer doesn’t spend any of his budget to resist)? The rule book has nothing to say about character stress, injury or death – a bit of an omission. I would certainly be inclined to have a similar mechanic to that used in FATE and Apocalypse World/Monsterhearts whereby characters with a specific named “condition” (e.g. “broken arm”) would have to suffer some kind of penalty if they try to do things that that condition would make harder (or a bonus if they could justify that the condition would make things easier). And I’d be inclined to make character death possible – but only if the character in question was being spotlighted in that particular episode (after all, cast members on TV shows die all the time).

In short, Primetime Adventures is a decent game, but the fact that the second edition was seven years ago now shows when contrasted with the more recent game rules I’ve been reading recently. I’d be tempted to write up quite a few hacks before playing it. But it’s flexibility and simplicity is extremely clever and inspiring and I really love the rules for providing characters with character arcs throughout the season. It would be an interesting experiment to run a game with non-gamer players and a non-supernatural or science fiction theme at some stage.