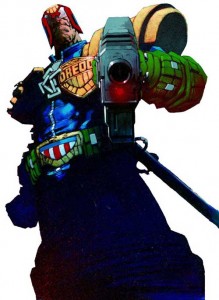 The new Judge Dredd motion picture will be released in the UK on 7 September. Word of mouth has thus far been exceptionally good after screenings at both Cannes and the San Diego Comic Con. Even Dredd’s main writer and co-creator John Wagner has given it his blessing.

As all Squaxx will know, this blog’s name was inspired by 2000AD (if you don’t know what a Squaxx is, you aren’t one), so I thought I ought to spend the next few weeks marking the release of the new film by writing a number of Judge Dredd related posts. I’ll be starting this by attempting to write an A-Z of Judge Dredd, featuring some of the main characters, concepts and themes of the 35 year old comic series.

But before I do this, I should really begin by writing a few things about Judge Dredd and his world, without which the rest of my articles won’t make much sense.

Judge Dredd the comic strip, first appeared in the second issue (or “prog” – short for programme – as I will refer to them from here on in) of British weekly anthology comic 2000AD. It was created by John Wagner and Carlos Ezquerra; however the influence of inaugural editor and early writer Pat Mills cannot be overestimated, nor can the visual style of early artist Mick McMahon (this isn’t to dismiss Wagner and Ezquerra’s impact on their own creation, merely to emphasise that it was the result of a number of brilliant creative people).

The basic idea of Judge Dredd is about as high concept as you can get: Judge Joseph “Joe” Dredd is a cop who has been empowered to act as judge, jury and, where necessary, executioner. He is, as he has been known to say himself, the Law. He operates in a place called Mega City 1, a megalopolis of hundreds of millions of people which stretches across the eastern seaboard of North America, in the late 21st and early 22nd century (unlike most US comic strips, Judge Dredd continuity happens in real time: the strip is set roughly 122 years after its publication date making the current year 2134). Most of the rest of North America, and indeed the world, is an irradiated nuclear wasteland.

He is not the only “Judge” – there are tens of thousands of them and an entire Justice Department which provides them with resources and auxiliary support. Indeed, the Justice Department has full control over the city. Following the Atomic War of 2070, the Justice Department invoked the Declaration of Independence as a pretext for overthrowing the president and taking control of the entire country. Citizens get to elect a council and a mayor, but they have no law-making powers and are responsible for little more than administration.

Judges have lots of toys with which they use to fight crime. Every Judge is issued with a Lawgiver, a handgun which fires six different types of bullet. They typically ride around the city on Lawmasters – incredibly powerful motorcycles which are armed to the teeth. They have handheld lie detectors, riot control gas and respirators, “day sticks” (essentially, baseball bats which they use to beat the living daylights out of people) and lots of body armour.

From the age of 5, they are trained for 15 years at the Academy of Law. Many do not survive this process.

Joe Dredd himself is a clone of Judge Fargo, the first Chief Judge. Dredd had a clone brother, Rico Dredd, but he was corrupt, leading to Dredd to sentence him to 20 years on the penal colony of Titan (one of Saturn’s moons) and eventually execute him. In current continuity, Dredd is 68 but the miracle of modern technology means that he is still pretty nimble. 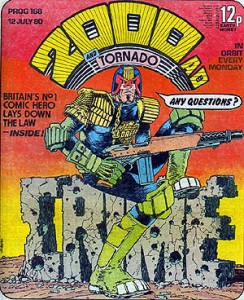 Is Dredd a fascist? Not precisely. The judicial system is certainly authoritarian and has many features that are common with fascism, but it does not revolve around a charismatic dictator and the rule of law is held up as being the most important feature of the system. As a system it is certainly vulnerable to sliding into fascism, and that is a theme which the strip has repeatedly explored.

Is Judge Dredd satire? There is no doubt that a vast number, possibly the majority, of Dredd strips are either overt satire or feature heavy satirical elements. John Wagner himself however is too good a writer to let us off that simply: frequently, he invites the reader to ponder if the system really is as bad as all that, and whether it might be the best system under the circumstances. At its best, Dredd is not mere satire but works as a thought experiment in the best tradition of science fiction: inviting us to ponder how we would organise a society as broken as the one portrayed in the strip.

Judge Dredd was made into a film in 1995. Most fans of the comic do not like this film very much.

That should be all you need to know, at least for now. Any questions? Ask them in the comments below.