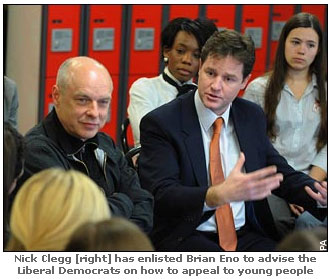 I find these so-called Clegg gaffes rather perplexing. I’m not a great believer in either Bowie or God, although I do at least respect the former.

It’s interesting to see that as far as the Telegraph is concerned, the Bowie and Pogues gaffes were far more serious than admitting to atheism, which only goes to show how times change (note also that while the Telegraph feels the need to point out who Nick Clegg is in the caption accompanying their photo, they take it for granted that everyone knows what Brian Eno looks like, even though he is rather less hirsute than he used to be).

I have to admit – I’m human – that I find it rather odd for the fan of a recording artist to list a greatest hits compilation as their favourite album or for a non-Martian to have never heard Fairytale in New York. The latter provoked an immediate reaction from one of my friends listening to him on the radio who texted me immediately (while I was sitting next to Clegg in fact, and I was planning to ask him about it if he had stuck around for a bit longer).

What’s most confusing though, is that painting Clegg as a young fogey simply won’t do. Young fogeys don’t set fire to cacti collections, drive around America with a Fistful of Theroux or hang out with Christopher Hitchens dressed as circus freaks. It just strikes me as odd that he wouldn’t have been able to answer those questions without trouble. My personal theory is that it was down to stress.

But casting Eno as a “youth” adviser? I’m not sure about the efficacy of having a youth adviser at all, but getting a man six months off from his sixtieth birthday strikes me as particularly odd. Eno strikes me as a pretty positive spokesperson for his own generation, the boomers who are slowly waking up to the fact that mortality applies to even them. Why not make him an adviser for that generation?

On God, I have to say Clegg’s first answer was better than his second. In this respect, it is a moot point whether we have made progress from Ming Campbell, who always seemed to get his answers correct on the second attempt.

His first answer, on Five Live, was a straight “no”. The follow up, a statement coming from his office, gushed about his agnosticism and emphasised that his children we being brought up Catholic. Without the clarification, this story would have had far fewer legs. With the clarification it makes him look like the epitome of the vacillating, anything-you-want-guv career politician. It would seem that Clegg’s instincts remain sharper than his office’s. The same office that nearly plucked defeat from the jaws of victory earlier this week (it’s called a P45 Nick).

It does put all this Christianophobia guff into perspective. Why should a politician feel the need to bend their knee to the pope in this way if we live in such an anti-religious society?

Another MP, who shall remain nameless, sent me their Christmas card. The front of it is a perfectly charming nativity scene. On the back, there is a still more endearing and funny picture of a polar bear which came runner up. I can’t help but feel that this polar bear lost out purely due to political correctness rather than any artistic merit, but where are the likes of Mark Pritchard denouncing it?

7 thoughts on “Who is closer to the heart of the nation – Bowie or God?”