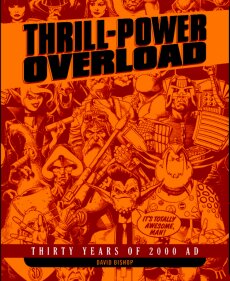 Hopelessly late, Thrill Power Overload – the history of British comic 2000AD – finally arrived in the post yesterday. It was well worth the wait.

For some reason, I wasn’t expecting a coffee-table book. I suspect the decision to produce it in this format was a relatively late one – hence the lateness and the enormous price-hike (although having ordered it on Amazon months ago, I ended up paying a third of its cover price!). In any case it was a great move – the book looks fantastic.

Needless to say, I haven’t read it cover-to-cover yet, although I did read its original serialisation in the Judge Dredd Megazine. Having said that, a third of it is apparently new material, so there is clearly much to discover.

Bishops’ text in the Megazine was often brutally revealing and didn’t pull its punches, particularly over the dark days when Egmont owned the comic and was pretty much content to run it into the ground. Don’t expect a mutual back-slapping exercise. Particularly during its first decade, the 2000AD creators have always tended to vent their frustrations with management in a coded way within the comic itself, and so attempts to pretend it was all happy families would be futile. When the NUJ called IPC workers out on strike and forced the comic to suspect publication for a month, the drama was recounted in a strip in which the creator droids, under the influence of the Dictators of Zrag, demanded extra oil rations from the Mighty Tharg. Most notoriously, Prog 500 featured Tharg’s Head Revisited – a chance for a group of artists and writers to vent their spleen at years of lousy wages and bad treatment. As this was one of the first issues I ever bought, a lot of it went completely over my head, but even then it was a thrilling read.

Despite a slight dip in quality in the early noughties, 2000AD has been back on a high for the past decade in my humble opinion. It has managed to keep the right balance of continuity and moving with the times. The current run of the comic is on a particular roll. Pat Mills has been producing his best work in years (he seems to have finally learned to keep his pontificating under control – Dafoe is a particular delight), John Wagner seems to be building up to something interesting in Judge Dredd (is the old git about to turn into a democrat?!) and Nikolai Dante seems to be building up to a delicious crescendo. There is a fin de siecle feeling to the comic overall at the moment, similar to how it felt in the late 90s just before its landmark Prog 2000; a sense that the creators are feeling the weight of 30 years.

2000AD is a cultural landmark. Strips like Judge Dredd are as uncomfortably relevant now as they were when it started (arguably more so, thanks to Tony Blair). It has infected two generations of (mostly) male youths with its own brand of paranoia, black humour, anti-dogmatism and anti-racism (okay, okay, it has tended to avoid full on anti-racism instead depending on analogies about robots, aliens and mutants, but one would have to be subnormal not to make the link). Most of the “Kapow! Comics grows up!” Trans-Atlantic phenomenon can be traced back to it despite the fact that so few people on the other side of the pond have ever seen it. While Tank Girl was never a 2000AD character, the Manchester International Festival would almost certainly not have just opened with Albarn and Hewlett’s Monkey last month: no 2000AD, no Deadline.

30 years of continued publication is a success in anyone’s book (your dad’s Eagle came and went in an instant in comparison). If it wasn’t so self-consciously anti-establishment, and if it didn’t refuse to take itself seriously, it would be knighthoods and Queens Garden Party invites all round. Hopefully this book will go some way to getting the comic the national appreciation it deserves; maybe my fellow Squaxx ought to take a leaf out of Richard Dawkins’ book? 🙂