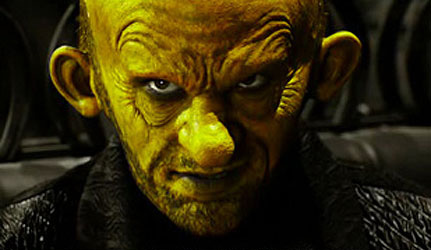 Being a comic geek, “Yellow Bastard” makes me think of Frank Miller and the eponymous paedophile and child-murderer of one of his Sin City stories. I never cared much for it. Still, there are worse things to be called I suppose. Labour members call Lib Dems Yellow Tories.

Still, the noises off within cabinet have inadvertently given us something to aspire to at last. It is a generally good rule of thumb that if Tim Montgomerie doesn’t approve of you, you must be doing something right, and so Conservative Home’s decision to launch a Yellow Bastards League Table suggests that the Lib Dems are finally starting to have an impact in government.

All in all, it suggests that the party has finally woken up to the fact that some of us have been shouting about for over a year: by occupying the centre ground in Parliament, the Lib Dems needn’t negotiate with their coalition partners as a junior party in government with just 57 MPs. Rather, in a great many policy areas, our true negotiating position is as the vanguard of the ragtag anti-conservative consensus which, on most days, can defeat any proposal David Cameron tries to bring forward. The Tories are the minority in this Parliament, yet for most of the past twelve months we’ve behaved as if they are in the ascendant.

Of course, it isn’t enough to simply know there are a lot of Labour MPs out there who don’t like the Tories; it is incumbent on Nick Clegg to build bridges. That’s why his inept talk about “new” versus “old” progressives and of never being able to resist and opportunity to take a potshot at Labour is so unhelpful. David Hall-Matthews outlined a more sophisticated way of dealing with Labour a couple of months ago on Left Foot Forward, but his advice seems to have gone largely unheeded. Clegg’s failure to even resist taking swipes at Labour in his speeches on AV during the referendum campaign period suggested that he was beyond rational thinking on the subject.

Clegg’s new doctrine of a more “muscular liberalism” at least shows that he has finally got the message about the need to show more distinctiveness, but if it is to amount to more than the Deputy Prime Minister flexing his biceps in a yellow posing pouch, he needs to start reaching out across the House of Commons. After all, we’ve seen with the referendum quite how willing many Labour MPs are to side with the Tories if they think it will help further destroy the Lib Dems. However futile and counter-productive their thinking is, many Labour politicians see the return of two-party politics as a strategic aim worth any number of Tory policies being introduced.

Perhaps, instead of replacing one futile attempt of toughness with another, he ought to try a bit of soft power for a change?