I’m what you might call a lapsed Terry Pratchett fan. For most of my adolescence, his work was a huge influence on me. But, as was typical of my late-teenage self, I walked away when he hit his most prolific period out of indignation about “cashing in” or some such self-righteous bullshit (I like to think I have a more sophisticated and generous view of artists these days). I never went back because the backlog got overwhelming, although I still intend to at some point.

Like everyone else, I was saddened to hear of his death yesterday. Amid all the tributes and an affectionate quotes that filled my various feeds, one image particularly jarred with me. Intended as a tribute, it was this British Humanist Association image, repeating the oft-cited quote “I’d rather be a rising ape than a fallen angel”: 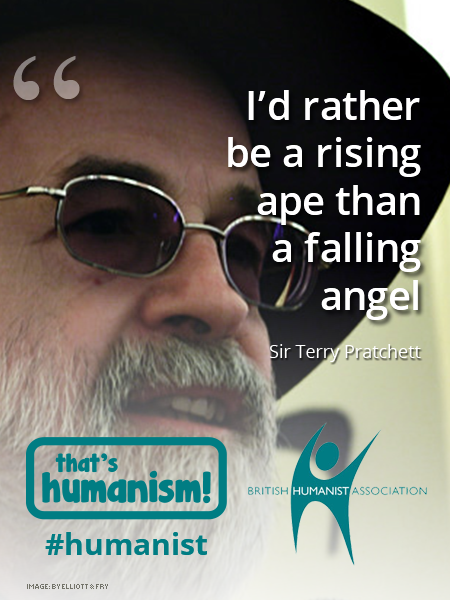 There are several things I could say about this. The first thing is, that I thought it was a shame that the first thing the BHA reached for was the most divisive quote they could find. The second is that, the concept of a “rising ape” is nonsense. The enlightenment notion that we are on a progressive path from amoeba to divine being was actually pretty much refuted by Darwin himself, whose own views about evolution did away with concepts that were very much steeped in notions of progressivism such as Lamarckism. Of course, much of that was subsequently undermined by Herbert Spencer and his championing of the most un-Darwinian Social Darwinism, but we emerged from that intellectual cul-de-sac 70 years ago.

To be fair on Pratchett, this is an off the cuff quip he made, apparently inebriated, at the end of a very long answer he answered at a Guardian event at few years ago. It’s not a quote from Pratchett as much as it is a quote from the anonymous sub-editor who chose to give this clip that title. His full answer is much more nuanced:

For me, the far more inspiring quote is at the start of the same section, when he makes largely the same point in a much more sophisticated (and funny) way:

But the third point I would make, via my friend James Blanchard, is that this in turn is an evolution of something Death says in The Hogfather:

“HUMANS NEED FANTASY TO BE HUMAN. TO BE THE PLACE WHERE THE FALLING ANGEL MEETS THE RISING APE.”

Both the last two quotes are classic, brilliant, wonderful Pratchett. The first one is not. It is such a shame that the former seems to be the one that is being parroted by the media today.

Looking for information regarding the likelihood of United States Cavalry ever being published (or written for that matter), I came across this extensive article written by Stephen Baxter about the history of GW Books/The Black Library via the Official Kim Newman Website. The article in question appears to be slightly out of date, for example it only refers to the republishing of Newman/Yeovil’s Demon Download cycle as a possibility, not a fact, and it doesn’t refer to the Black Library’s expanding out to licensed work such as their 2000AD line at all.

Nonetheless, the article contains lots of little gems. As a spotty youth at the time that many of the events discussed in the article were going on, it is comforting to have confirmed that the transparent and short term greed of Games Workshop at the time was just as disliked by the “talent” as it was by the fans. Bryan Ansell in particular appears to have been a colourful character. A hate figure of my generation, yet it was only when he left the company that GW became the wholly commercialised monster it is now.

It also offers us a tantalising glimpse of GW Books that may have been, with Terry Pratchett ghost writing the finest hackwork money can buy: “I feel a bit like King Herod being invited to write the newsletter for the Bethlehem Playground Association.”

Oh, and it got me peeking at John Blanche’s website. I was obsessed by Blanche when I was doing my Art GCSE and looking back at his work now I can at least still appreciate his mad genius.