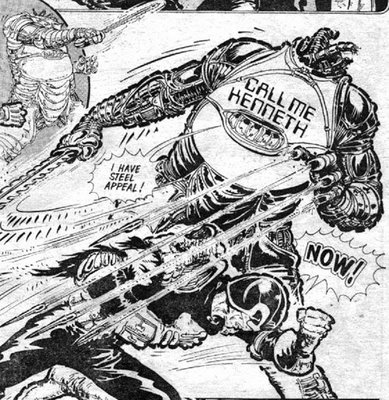 I’ve already written several times about pivotal moments in the development of the Judge Dredd series; points which proved decisive in the survival of the strip and its development. Robot Wars (progs 10-17, 1977, with a prologue in prog 9) is the first of these pivotal moments.

It is easy to forget given how it came to dominate the comic, but in the early days there was no reason to regard Judge Dredd as different to any other strip running in 2000AD. It was not “featuring Judge Dredd” – indeed the character only first appeared in prog 2. If anything, it was “featuring Dan Dare”, the 1950s space pilot who editor Pat Mills had revived to spark interest in the new comic. True, it is clear that Pat Mills felt he was onto something with Dredd, which is why its development process ended up being quite so tortuous, but that was no guarantee that the character would survive if it couldn’t prove itself.

John Wagner and Carlos Ezquerra’s decision to walk away from their creation was a severe blow. The first seven Dredd strips to appear in 2000AD were written by Peter Harris, Pat Mills, Kelvin Gosnell, Charles Herring and in particular Malcolm Shaw. With the exception of Judge Whitey (prog 2, 1977), Dredd’s first appearance, none of these stories are remembered with any particular affection.

Robot Wars was the first multi-part storyline. More significantly, it was also the first story written by John Wagner to appear in print (and the first story drawn by Carlos Ezquerra, albeit only for one episode). The difference in quality is quite striking.

The story revolves around a robot called Call-Me-Kenneth, a carpenter droid (and yes, that is a Biblical reference) who kills his brutal master and leads a rebellion amongst the robots. Dredd defeats this rebellion, assisted by his robot servant Walter, who is granted full citizenship at the end of the story but chooses to continue working unpaid for Dredd anyway.

This is the first time the satire in the Dredd strip really bites. The analogies being drawn between African slavery and the brutal treatment of the robots by the humans are pretty easy to spot. Call-Me-Kenneth is enjoyably villainous, but the humans and in particular Judge Dredd don’t exactly come off well in this story either. It is the much put upon robots caught up in between we are really being invited to sympathise with. 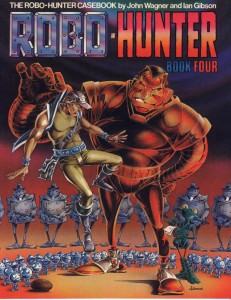 The both the theme of robots-as-oppressed-people and the comic potential of robots were to go on to become recurring themes in 2000AD. Killer Car (progs 53-56, 1978) recycles a lot of the comedy in Robot Wars, and Wagner went on to collaborate with Ian Gibson, artist on both Robot Wars and Killer Car, on Robo-Hunter. Meanwhile, Pat Mills went on to make the plight of intelligent robots a theme in Ro-Busters and ABC Warriors.

Back in Judge Dredd, Walter would go on to be a recurring character for many years, even getting his own series of one-page strips drawn by Brian Bolland. Rejected by Dredd, Walter ends up founding a Call-Me-Kenneth worshipping cult in Giant (Megazine 2.50-52, 1994). And there was a second robot war, this time lead by crimelord Nero Narcos, as recounted in the Doomsday Scenario (progs 1141-1164 & Megazine 3.52-59, 1999).

Robot Wars was a triumphant return to the Judge Dredd strip by John Wagner which set the tone of the series for years afterwards. While simplistic by today’s standards, it’s quality shines through. As with The Pit almost 20 years later, if Wagner had not returned to write was in effect a manifesto for the strip at this point, it is very unlikely that the strip would have lasted the year, let alone 35.