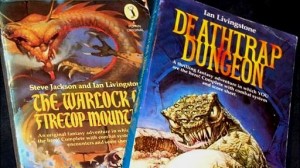 A filmmaker is attempting to raise £40,000 on Kickstarter to make a film about the development and legacy of Ian Livingstone and Steve Jackson’s Fighting Fantasy gamebooks. It’s an ambitious project which I’d love to see happen, so I’ve chipped in and would encourage you to do the same.

I was one of the first generation of Fighting Fantasy fans, starting with the publication of the Warlock of Firetop Mountain in 1982. We didn’t have the Puffin Club at my school; we had the Chip Club. Nonetheless, that was how me and my sister discovered the series and I quickly graduated onto the Forest of Doom, City of Thieves, Starship Traveller and Deathtrap Dungeon.

I had a bit of a pro-Ian Livingstone bias, which was probably unfair in retrospect and I suspect was limited to the fact that I got Forest of Doom while my sister got the more experimental Citadel of Chaos. That changed when I discovered the Sorcery! series, with its spellbook, overarching plot and gorgeous John Blanche artwork. I was pretty hardcore, buying Warlock magazine from issue 2, the Out of the Pit monster manual, the background book Titan, and so on.

They weren’t perfect. Like most RPGs at the time, they tended to be both combat heavy and leave you rather dependent on the luck of the dice, which was a little redundant as if you died, you would tend to simply ignore the result and carry on. But the Fighting Fantasy books opened so many avenues for me. Like many other people, they encouraged my reading, and it will be no surprise to anyone to learn that they got me into roleplaying games. But I’d credit them with something more fundamental than that, in that they made me realise at a young age that I didn’t have to just be a consumer, but an active participant in my media as well (of course, this also came at the same time as the rise of the home microcomputer – which had a similar democratising effect. As it happens there’s also an open Kickstarter at the moment to fund an updated version of Elite).

This is an important part of my personal history, so I’m keen to see the documentary get made. Plus, it is possible I might be making a minor appearance in it as they appear to be using footage from Ian Livingstone and Steve Jackson’s presentation at this year’s UK Games Expo in it, in which you can quite clearly see me in the audience! So please have a look at the Turn to 400 Kickstarter and consider putting some dosh behind it.