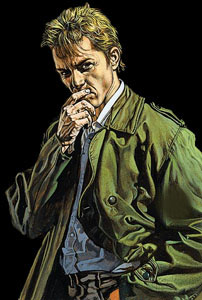 I watched the film Constantine last night despite having avoided it for three years. It was three quid at Madame Zaza’s or whatever the Virgin Megastore is called these days, and I was at a loose end.

For those who don’t know, Constantine is based on the DC/Vertigo comic Hellblazer although the main character first appeared during Alan Moore’s iconic run on Swamp Thing. I’ve only recently started reading it again (I gave up when it was written by Americans and they used Manga-esque artists to draw it; I intended to pick it up when Mike Carey started scripting chores but never got around to it), but doggedly collected all the Jamie Delano and Garth Ennis scripted issues.

The important thing to know about him is that he is an occult grifter; a chancer and a gambler who is always a couple of steps away from damnation and who invariably ends up getting his mates killed. The tone is not so much Gothic as grungy. He survives pretty much by his wits alone and certainly doesn’t have any Batman or James Bond style gadgets. Superficial characteristics? John Constantine is blond and English (Liverpudlian technically); Alan Moore’s description of him was that he looks like Sting (this was in the early 80s when that was meant as a compliment). It is mostly set in London and he has a dimwit mate who is a cabbie called Chaz.

The film version? Constantine is the ultimate Californian, played as he is by the black haired Keanu Reeves. It is set in LA. His “assistant”, called Chas, is a cab driver but a sharp witted kid played by that bloke off the Transformers film. Oh, and eschewing the no gadgets rule, Constantine has a pair of ‘holy’ knuckle dusters, a ‘holy’ gun and a dragon flame flamethrower. It borrows liberally from both the Delano and Ennis runs of the comics (Papa Midnight, Gabriel, the lung cancer…) but twists each and every one of these features into something more generic and less fundamentally interesting compared with what can be found in the original. Far from the solo operator found in the comics, Constantine is recast as some kind of quasi-official exorcist who “deports” “half-breeds” on behalf of the Catholic church.

It is usual for film adaptations of comics to play fast and loose with the source material, yet the most successful (critically if not commercially) have been the ones which, if not in keeping with the details of the strip on which they are based, at least stick to the essence. Spider-Man, X-Men, Batman Begins and Ghostworld are all examples of this. There does seem to be something about Alan Moore creations which inspire filmmakers to simply take the piss out of the original fanbase. Constantine isn’t actually, in my opinion, the worst offender in this respect. From Hell was utterly horrendous, taking as it did a book which explored the subject of Jack the Ripper in a poetic, meta-fictional way and shoehorned it into a bog standard Hollywood thriller with Johnny Depp doing sub-Jack Sparrow impersonations.

At least there are no pretensions about Constantine. It’s trash and it knows it is. I found myself liking it a lot more than most of the other popcorn sub-horror trash I’ve put myself through in recent years. Both Tilda Swinton and Peter Stormare are fabulous.

But why does Hollywood gorge itself on this hamburger when if it stuck more closely to the source material it could be feasting on steak? Yeesh. Watchmen is going to be so painful, isn’t it?