On Friday I went to my first barcamp and, as per the rules, I’m meant to blog about the experience. So here goes.

First of all, I should write about my expectations. In retrospect I think they were a little too high, like I had just got some kind of golden ticket into the inner sanctum of the social media world. Somehow I had it in my head that I was going to have some revelatory experience due to the format of the event itself. None of this is rational, but to hear some people talk about barcamps and unconferences, you’d think that people had come up with some sensational new form of organising which was quietly transforming the world. The reality was a little more prosaic.

As someone with a background in politics, and in particular youth and student activism – typically disparaged by the social media world for its lack of inclusiveness – the format itself wasn’t that different to what I’m used to. Indeed, the lack of structure was in many ways inversely related to the level of participation. I could have really done with a bit of hand holding to begin with.

I’ve already been told off by colleagues for making so-called grumpy tweets about the lack of an icebreaker. I didn’t mean them to come across that way; they were meant to be constructive. But my fundamental concern about the day is that I left without a clear idea of who else was attending, when I feel I really needed to know that at the start in order to make the most out of the day. And, while many people are blessed with the ability to go up to complete strangers and start engaging with them, I’m not. In the end, I got the most out of the more salesy sessions than the discursive ones for the simple reason that the organisers of the former had more of an interest in being engaging.

Let’s just get a few other housekeeping things out of the way. Again, this isn’t meant to criticise, just for future reference:

1) Organiser Sylwia Presley acknowledged on the day that the structure of a main plenary room and breakouts wasn’t ideal for the format. In my experience, a large room like that can be made to work but you need to break it up into several small groups and discourage the conference format wherever possible. Arrange the chairs into 3-4 circles around the room at the start. If a full plenary is absolutely necessary, then get people to move their chairs to form one. But should a full plenary, at least on conventional conference lines really necessary?

2) Instead of leaping in with some rather specialised topics, start the day with some deliberately general topics (“introducing barcamp” or “what are the challenges we face?”) and get people breaking into groups to begin with. Encourage people to spend those first sessions talking about what sessions might be needed for the day. Give them post-it notes to write the ideas down. By all means have pre-prepared topics, but don’t put them up straight away as that will automatically dictate the agenda to everyone else; instead have them as a fallback. Attempt to gain some consensus on them first before putting them up, so that everyone is on a more level playing field; you may even find it makes more sense to merge two sessions or hold multiple slots or another topic that way.

3) For a building which houses the Prince’s Foundation for the Built Environment, 19-22 Charlotte street did have some remarkably poor signage. Personally, I never got my head around where two of the breakout areas where and missed some interesting sounding sessions as a result. Always come to a venue armed with makeshift signs and blu-tack.

With all that out of the way, what did I actually learn from the day itself?

1) Google Hangouts are interesting, and there might be something in it, but I’m yet to be convinced of its value for non-profits. I can see their potential as an organising tool, for getting groups from around the country to interact. But with a maximum of 10 users at any one time, it has the potential to become a victim of its own success with willing participants unable to jump in. Admittedly, getting to the stage where that becomes common would be a good problem to have for a small network.

I was wholly unsold on the claims that they are powerful because “TV news anchors might pop by” (one of the speaker’s anecdotes about George Takei being a keen exponent lead to me having an extremely vivid dream that night about George Takei turning up to support a campaign I was organising; he was a lovely bloke. But I digress). While I can totally see what is in it for celebrities to use such tools to engage with fans in a manageable way, I can’t see how the same applies to NGOs, aside from some weird bragging rights.

2) I was rather more sold on using AudioBoo; indeed, this was one of my take-aways. I can see definite merit in my organisation making much greater use of this app in the way that I attempted, and failed, to make use of video in the past. The problem with video is that even a short three minute video winds up being a couple of hours in terms of editing and faffing about. Uploading short interviews on a regular basis and have the website sort out feeds, iPod channels and embed codes? Given that I’ve had an AudioBoo account since its early days, I can’t understand why I didn’t think of it before.

3) I think I can see the potential of Storify as a curating tool for campaigns, but the website itself is hopeless at explaining its potential and I didn’t actually attend the session at which this was discussed. So, I’ve had a little play myself to get my head around it. I can see how this could be quite useful in terms of creating an accessible space for people to follow a specific campaign or issue that an organisation is focusing on.

4) The challenges facing large nonprofits and small ones are wildly divergent. This was brought home to me when I found myself sitting in on a session entitled “who owns social media?” In my organisation the answer is, broadly, whoever wants to. The problems people described in that session, in which tech teams would be responsible for designing sign up tools but not necessarily have a clue about making the best use of language, or of struggling within an unmanageable command structure, were quite alien to me. I think it would have been useful to unpick whether such structures are genuinely beneficial to an organisation but without much of a common frame of reference, I struggled to really find a hook as a means to contribute.

5) Too many people see a dividing line between campaigning and fundraising that isn’t really there. This is a small organisation problem as much as it is a big organisation one, and something I struggle with myself (having recently taken on direct responsibility over fundraising at UD). The web in general, and social media in particular, blurs the edges between the two to the point where distinguishing them as anything other than two sides of the same coin is no longer helpful. It was my perception however that there were a lot of people at the event who were only really thinking of social media as a way of making money rather than as a way of fulfilling their organisation’s goals more generally. I suspect that if you only look at it as a way of feeding the cash cow, you won’t ever get it to be a profitable exercise for you.

6) Last week was Social Media Week. Now, I’m a pretty web-savvy person and I’m a total Twitterholic. Yet I had no idea about this. I’d be amazed if anyone other than a self-identified “social media professional” had a clue that this was going on. That ought to send chills down people’s spines because spending a week talking to yourself and not even expanding your audience is an utter waste of time.

The day itself gave me plenty to think about both in terms of social media and event management and I’m glad I went. With the whole barcamp thing now demystified, next time I will hopefully be a little less backward in coming forward!

My thanks to all the organisers who made the day happen.

James Graham is the Campaigns and Communications Manager of Unlock Democracy but writes here in a purely personal capacity.

Proud to be a member of the Long Tail: 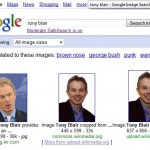 To see how fondly Tony Blair is remembered, you only need to see the “related searches” in this image.