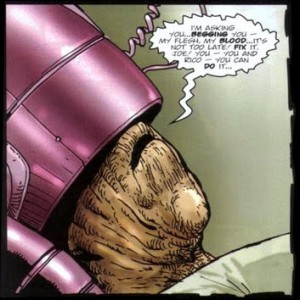 Dredd 3D will be fairly unique as movie comic book adaptations go because it will be neither an origin story, incorporate an origin story or be the sequel to an origin story. The reason for this is quite simple: Dredd doesn’t really have one in the superhero sense. Because Dredd is essentially a walking high concept, the strip has never burdened itself with wasting too much time focusing on motivation. He’s a cop, he shoots people, he’s a clone and he spent his entire childhood being trained to do what he does; what more do you need to know?

To the extent that Dredd needs an origin, Eustace Fargo serves a dual purpose. Not only is Dredd a clone of Fargo (the so-called bloodline which has fuelled several Dredd storylines), but Fargo is the person responsible for establishing the judicial system in the first place. So it was inevitable that at some point they would get around to telling his story; what’s surprising is that it took them 30 years to do so.

Most of the background presented in Origins (progs 1505-1519, 1529-1535, 2006-2007) was relatively unsurprising, and I’ve covered a lot of it in my entry on President Booth. The main revelations essentially exist to explain a number of continuity glitches which had appeared in the strip over the years. So it emerges that Fargo had an illicit affair in 2051 and attempted to commit suicide. A cover up ensued and his injuries were sufficiently serious that they felt the need to announce his death – announced as a brutal murder. He recovered however and was kept alive to act as his successors’ secret advisor and as Chief Judge at large. He lives for another 20 years, thus allowing him to do all the things past stories had said he had done after his official death, but eventually his injuries prove too much and he is put into suspended animation whereupon a renegade group kidnap the body. 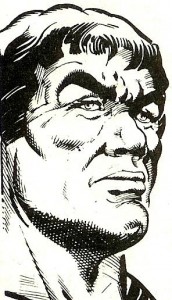 It isn’t entirely clear when the decision to establish that Dredd is Fargo’s clone was made. It is first announced in A Case for Treatment (prog 389, 1984), but is slipped out in such a casual manner that it is almost as if the writers had assumed they had already revealed it. Indeed, a clone foetus of Fargo’s appears briefly in the previous story Dredd Angel (377–383, 1984), but no explicit link is made then. Indeed, Fargo’s face is shown in Dredd Angel, implying the artist had no idea about his lineage (Dredd’s face is never shown as a matter of convention) – although it is fair to say that the face does feature a rather Dredd-like chin.

Either way, making Dredd Fargo’s clone seemed to fit perfectly. Ever since, the series has explored the idea of bloodline and whether it is nurture or nature that makes Dredd the man he is repeatedly. Aside from The Return of Rico (prog 30, 1977) in which Dredd’s clone brother returns after 30 years on a penal colony to wreak revenge, it is first explored in a significant way in the Kraken story arc, which begins in Oz (progs 545–570, 1988) and ends in Necropolis (progs 674-699, 1990). Kraken is a Judda, a tribe of judge-like warriors founded by renegade judge and founder of the cloning programme which created Dredd, Morten Judd. When the Judda are defeated, the Justice Department attempts to rehabilitate a handful of them and Kraken shows real promise. Dredd however detects an arrogance in him and fails him in his final assessment to become a judge (Tale of the Dead Man, 662-668, 1990). When Dredd goes into exile however, the Chief Judge decides to suppress this news and secretly replace him with Kraken.

It is left ambivalent as to whether Kraken fails and ends up responsible for releasing the Dark Judges because of an inherent weakness or because the power of the Dark Judges is too strong. The next time a Fargo clone appears it is in happier circumstances. The clone foetus which appeared in Dredd Angel has grown up and Dredd is again in charge of assessing him (Blood Cadets, 1186-1188, 2000). This clone passes the test, adopts the name Rico in honour of Dredd’s brother and has been a mainstay of the comic ever since (rumours that Rico was created simply to replace Dredd with a younger model – possibly by way of a body transplant – have proven to be false). Yet another clone to appear has another future. Dolman is a model cadet but dislikes the discipline associated with being a judge and ends up resigning (Brothers of the Blood, progs 1378-1381, 2004). For a full list of Fargo clones which have appeared in the Dredd series, see wikipedia.

It is fair to say that in the world of Judge Dredd neither your genetic heritage or your upbringing are particularly good factors for predicting whether or not you are going to end up as a hero, villain or something in between.

Both Fargo and Rico are major characters in the 1995 Judge Dredd motion picture. Confusingly though, despite all sharing the same genetic code with Sylvester Stallone’s Dredd, none of them look alike (why they didn’t make Rico look like he does in the comics given how neatly it would have solved the problem of Stallone having to play two characters I will never understand).

F is also for… 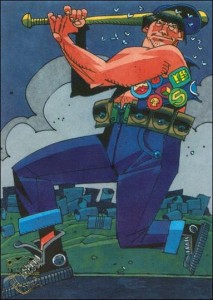 Not to be confused with Rob Schneider’s Fergie in the 1995 film, the Duchess of York or the Black Eyed Peas singer, Fergee is a simple minded lunk who Dredd discovers in the Undercity (the underground network of tunnels and caves underneath Mega City 1 which was formed when it was concreted over) while on the run from Cal. Befriended by Dredd, Fergee is ultimately responsible for killing Cal, killing himself in the process. As a subsequence, hundreds of Fergee monuments are erected across the city (The Day the Law Died, progs 89-108, 1978-1979).

Dan Francisco is the 10th Chief Judge of Mega City 1 (or 9th depending on whether you count Fargo who was technically the Chief Judge of the whole of the USA). He takes over from Hershey after the failure of her attempts to reform the anti-mutant laws in favour of a more permissive policy which enables thousands of mutants to move into Mega City 1 – a policy which Dredd effectively blackmails her to adopt. Francisco is elected mainly on the basis of his popularity – he is the host of top rated reality television programme the Streets of Dan Francisco.

From the beginning, Francisco is portrayed as a puppet of Judge Martin Sinfield, who becomes his deputy. However, Francisco insists on adopting a more liberal approach towards removing the mutants living in the city than Sinfield is prepared to accept. Frustrated with this, Sinfield resorts to drug Francisco with a hypnotic drug (developed by mass murderer P. J. Maybe) and persuades Francisco to resign (Tour of Duty, progs 1650 – 1693, 2009-2010).

Eventually Sinfield’s crime is exposed and Francisco is restored to full office and full health. However, shortly after this the events leading up to the Day of Chaos (progs 1743–1789, 2011-2012) occur, eventually leading to most of the city’s population being wiped out. Francisco has since resigned and Hershey has been reinstated on a temporary basis.