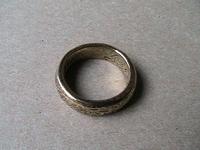 I have to admit, I saw this picture of a proposed Energy Island in the Guardian on Monday and my first thought was “what happens if they roll a 7?”