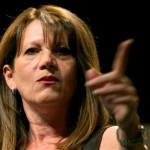 Try as I might, I can’t stop getting annoyed by the whole debate surrounding Suzanne Moore and her continuing feud with the so-called “trans cabal” (this isn’t really an article by the way, just a series of random points – but at least it is mercifully shorter than my last effort).

Yesterday, Moore wrote a bizarre article in which we sought to argue that her persecution at the hands of transgender and queer activists is a freedom of speech issue.

What’s got her and, for example, Padraig Reidy at the Index on Censorship, jumping up and down is that the International Development Minister Lynne Featherstone tweeted on Sunday that she thought Julie Burchill should have been “sacked” for her Observer article attacking transgender people. Now, for the record, I don’t think Featherstone’s intervention was very sensible. As has been pointed out by others ad infinitum, Burchill is a freelancer and any intervention by a government minister was bound to end up a distraction – and so it has proven. Both Reidy and Moore have leapt on this as an example of state censorship and proof that Leveson report is dangerous nonsense that will lead to government interference of newspapers. The fact that this was a junior minister who is a member of a junior coalition partner just expressing her personal opinion (and the fact that Leveson wasn’t actually arguing for a government body to regulate the media but rather self-regulation underpinned by a statute to be overseen by the judiciary) gets ignored amidst all the shrieking.

The fact is, this is not a freedom of speech issue. The Observer did not take down the Burchill article (and I agree with Jane Fae that it was counterproductive for them to do so) because of Lynne Featherstone or any other government minister’s intervention – you can bet they’d be shouting about it right now if they had done so. It will be interesting to see what they say about it on Sunday but right now it appears that the editor John Mulholland took it down for the exact same reason he put it up in the first place: good old fashioned venality. They that sow the wind, shall reap the whirlwind.

I’m highly suspicious of people who are quick to leap up and down about Featherstone’s intervention being somehow sinister and an attack on civil liberties, while being so blithe about the assymetric power dynamic between Moore and her critics. There are a lot of pissed off trans and queer people out there right now who feel that Moore has been using her considerably privileged media platform to utterly misrepresent them in this debate. Again, Stavvers sums it up better than I could. What I don’t understand is why Moore is sticking to her guns in terms of her right to express her “anger and pain” while at the same time is so utterly blind at the fact that the people who are furious with her are doing exactly the same thing. At the end of her article she writes:

So I regret not making it clearer that we need both love and anger to be free. And you may continue to hate me, put me on lists, cast me out of the left. Free-thinking is always problematic. But if you take away my freedom to love, be intemperate, silly, angry, human, ask yourself who really wins? Who?

Yet it has been clear from the get go, that the problem has been her capacity to love in the first place. She escalated this row, and she continues to do so on an hourly basis on Twitter. As Deborah Orr said in response to her latest (at the time of writing) explicit troll:

@suzanne_moore Are you SURE you want the “trans cabal” to stop?

The most telling line in Moore’s article is when she compares Featherstone to being a “humourless, authoritarian moron” (my emphasis). She isn’t the first to imply, or even express out loud that the problem at the heart of this debate is people who just “can’t take a joke”. Usually claims of humourlessness are the preserve of people like Jeremy Clarkson in their unending defence of “banter“. I’ve seen an awful lot of people over the past week making pretty similar defences, only suggesting that it is only transgender people and their friends who need to “get over it”. For some reason we are supposed to feel great at the progress we’ve made in fighting cissexism, homophobia and racism – yet we are meant to accept that trans people are an exception it is fine to laugh at and casually dehumanise. The debate seems, at its heart, to be between people who see this as an intolerable contradiction and people who don’t.

Finally, if we are to believe that this is a freedom of speech issue, and that Lynne Featherstone represents an oppressive, authoritarian government determined to crack down on the freedom of expression, why is it that the same government has just this week agreed to scrap Section 5 of the Public Order Act 1986? Both Padraig Reidy and Suzanne Moore chose to ignore this inconvenient little factoid. In the case of Reidy, and the Index on Censorship, they have failed to acknowledge this at all on either their blog or weekly email newsletter. Perhaps this is because it’s a little bit of state oppression that never really affected journalists? Throughout this week I haven’t been able to shake the feeling that the real anxieties at the heart of this debate are rooted in professional self-interest rather than any genuinely noble concerns about the state of democracy; I’ve seen very little to shift this notion.