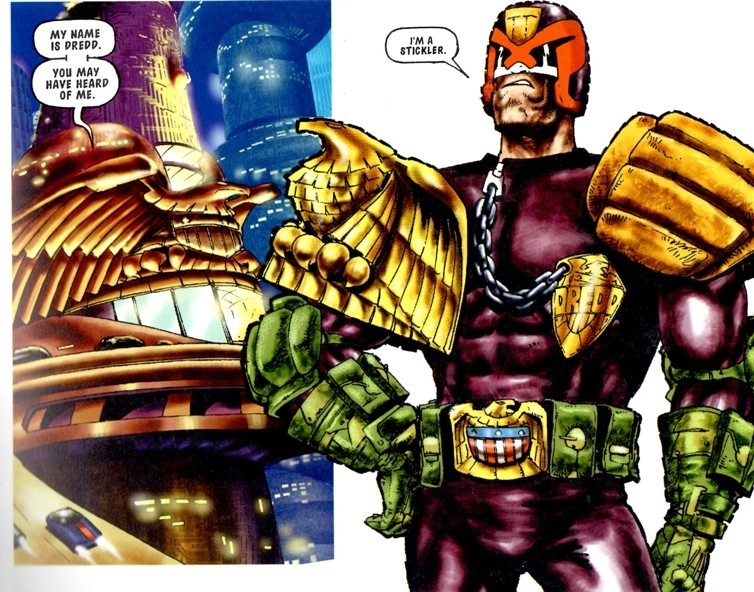 I would argue that there are four main eras of the Judge Dredd strip. The first, which ended at the conclusion of the Judge Child saga, was mainly focused on world building and having the strip find its identity. During the second era, dominated by John Wagner and Alan Grant’s powerhouse writing partnership (and Ron Smith’s art), the strip had a very clear identity. The “golden age” of the strip, this was the era of future crime, zany crazes and at times very broad comedy. It sort of came to an end when their partnership ended, but staggered on until the conclusion of the Necropolis saga, which wrapped up a number of plot threads which had been developing throughout that era.

The third era nearly killed the strip. This is the era dominated by Garth Ennis, Mark Millar and Grant Morrison; three writers who, regardless of their individual qualities as writers elsewhere, completely failed to understand the world John Wagner, Alan Grant and Pat Mills had established. The series declined as a series of worthless and often downright offensive stories took their toll.

Wagner and Grant have to take their share of the blame as well. While Alan Grant’s strips at their worst were better than the best Mark Millar certainly could conceive, they were hardly groundbreaking. While treating the character with somewhat more respect, his vision of the character as little more than a fascist who shoots litterers proved too limiting. John Wagner’s work during this period stands out as consistently superior but despite that they are generally unimpressive with even the Mechanismo/Wilderlands story arc failing to rise above average.

In short, the Dredd strip was in the last chance saloon even before the 1995 film failed to shine. Fortunately, it would appear that John Wagner realised that and on his return as head writer of the series, decided that radical changes were needed. This lead to The Pit (progs 970-999, 1995-1996) and the start of the fourth era of the strip (which may be ongoing or have possibly just ended; it’s too soon to tell).

Arguably, the shift in style can be dated back to The Cal Files a few progs earlier (progs 959-963, 1995); but The Pit is where it all came together. The story was a departure in two ways. Firstly, it shifted in emphasis from action adventure to police procedural – this may seem obvious for a strip about a future cop, but this sort of story had in fact been relatively rare until this point. Secondly, it shifted away from being just about Dredd himself to being more of an ensemble piece. Over the years, Dredd had acquired quite a large supporting cast but this was the first time they were presented less as sidekicks and guest stars and more as teammates.

The overall plot of The Pit is small scale in comparison with the other so-called mega-epics. Concerned by the suspicious death of its Sector Chief, the Chief Judge appoints Dredd as Acting Sector Chief of Sector 301, the eponymous Pit so named because of its high crime rates, high corruption and use as a dumping ground. Dredd sets up a team of disaffected judges to investigate the old Sector Chief’s murder and eventually helps the local force uncover a widespread conspiracy being coordinated by the Frendz Crime Syndicate.

Such a simple plot for a series famous for its nuclear wars and supernatural threats. And yet it was the most enthralling Dredd story to appear in years – quite possibly for precisely that reason. For the first time in years the strip had relatively rounded characters and actual drama (as opposed to simply blowing lots of things up). It was a winning formula.

The story introduced three significant recurring character. In addition to Galen DeMarco, there was Buell – who would go on to become the head of the internal affairs-style Special Judicial Squad – and Guthrie, a Wally Squad operative forced to go underground who Dredd decides to bring in from the cold. The story ended up having a direct sequel, Beyond the Call of Duty (progs 1101–1110, 1998) – which blended the threads left at the end of The Pit with the developing Edgar story arc, and eventually Doomsday, in which the head of the Frendz Nero Narcos decides to declare war on the judges, frustrated by their repeated attacks on his crime syndicate.

Before The Pit, it was starting to look worrying as if the Dredd strip had simply come to a natural conclusion and that there was nothing left to do with it. After The Pit, the series has never really looked back. It marked a significant change in style and tone for the strip which Wagner has now turned into a fine artform (to the extent that while Day of Chaos is superficially a retelling of Block Mania and the Apocalypse War, in style and tone it could not be more different).

Indeed, it is possible to read The Pit as analogous to the fate of the strip itself: neglected for years, Wagner returned to give the strip a new sense of purpose and pride in itself.