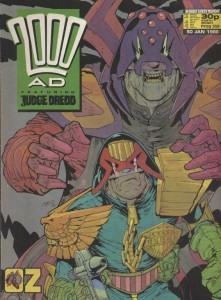 The Judda are one of my favourite, woefully underused villains. In fact, discounting Fargo clone Judge Kraken, the Judda have only appeared in one story, Oz (progs 545–570, 1987-1988).

Apparently timed to coincide with Australia’s bicentary, Oz functioned as both a continuation of the Chopper storyline and an opportunity for Wagner and Grant to write a story based on some rather distinctive designs of some rather extreme looking judges by Brendan McCarthy. These were to become the Judda.

The original plan was for art duties for the story to be split between McCarthy and Cam Kennedy, the fan-favourite artist who had redesigned Chopper for the previous Midnight Surfer storyline. In the event, Kennedy could not do this – his slots were hurriedly filled by a number of artists resulting in some problems with both quality and continuity – and Brendan McCarthy ended up only drawing a handful of episodes.

The Judda sub-plot revolved around the discovery that Morton Judd, the scientist behind the cloning programme which was responsible for the creation of Joe and Rico Dredd, was still alive. In hiding since his failed attempt to overthrow the justice department, Judd had used stolen genetic material from the cloning programme to create his own army of Judda – warriors brought up to believe in a warped version of the judicial system, mingled with a personality cult revolving around Judd himself. With Judd seemingly about to launch an attack on the city, Dredd is sent to “Oz” (Australia) to hunt him down.

Needless to say, Dredd succeeds, blowing up both Judd and his secret base inside Ayers Rock (the story was written before the campaign to call the rock Uluru had gained much traction).

Morton Judd appears in one other story, Origins (progs 1505-1519 and 1529-1535, 2006-2007). Ostensibly a continuity cleaning up exercise, Origins came about in part due to the continuity glitches which Oz had established. In fact, however, Judd appears mostly in the background, with the bulk of the story focused on Fargo himself and the fall of President Booth.

Notwithstanding the fact that Judd dies at the end of Oz, it is surprising that we have not seen the Judda since and that Kraken was the only captured Judda to have not been exterminated. But given the times characters have been brought back and overused, I suppose I should be careful what I wish for.

J is also for… 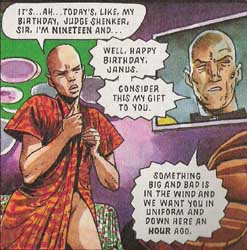 Another member of Psi-Division who, while Anderson was off exploring herself around the galaxy, briefly had her own spin-off series after appearing in Inferno (progs 842 – 853, 1993), written by Grant Morrison.

Strikingly bald, the character has not appeared since 1997. 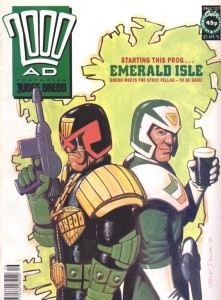 An Irish judge who polices Murphyville, Garth Ennis’s satirical vision of Ireland in the future. He first appears in Emerald Isle (progs 727-734, 1991).

While Emerald Isle is an enjoyable enough story, it pretty much sums up the problem with Garth Ennis’s run on the Dredd strip, and indeed Garth Ennis’s weakest work elsewhere. Ennis has a tendency to fill his stories with Guinness-drinking Irish stereotypes (see also Hellblazer, Preacher, Hitman, Dicks). Occasionally the material transcends this; far too often that’s pretty much all it amounts too. Ostensibly self-deprecating (Ennis is from Northern Ireland), all too often it comes across as a crutch in his work.

Wagner and Grant’s weakest Dredd strips are little more than two note gags. Ennis rarely reached that level of sophistication throughout his run on Dredd. This is a great shame as he is a highly regarded with a whole string of hits to his name.