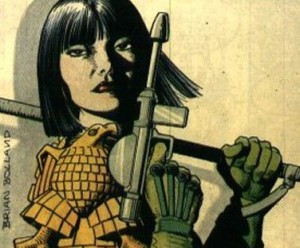 Second only to Anderson, Judge Barbara Hershey is the longest surviving member of the Dredd supporting cast. Created by John Wagner and Brian Bolland (who drew her with a distinctive Louise Brooks’ style bob), she first appeared in the Judge Child saga (progs 156–181, 1981) as one of two street judges appointed to assist Dredd in his mission. Dredd and Hershey’s relationship gets off to a rocky start as Hershey perceived Dredd persecuting and being responsible for the death of the third judge, Lopez, for the latter’s refusal to shave off his moustache. 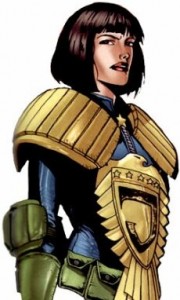 Nonetheless, Hershey impresses Dredd sufficiently that he handpicks her for his Apocalypse Squad at the end of the Apocalypse War. She goes on to have a meteoric rise, joining the ruling Council of Five whilst apparently still in her 20s, and being made acting Chief Judge during Judgement Day (progs 786–799 and Megazine 2.04–2.09, 1992). Hershey comes bottom of the poll in the election to replace Chief Judge McGruder in 2116, but ends up in that office in 2122. She remains Chief Judge until 2131 where her decision, at Dredd’s behest, to reform the anti-mutant laws, proves to be unpopular and she is ousted. In 2134, she returns to once again serve as Acting Chief Judge following the Day of Chaos disaster (Day of Chaos: The Days After, prog 1789, 2012).

Hershey also had her own solo series in the Judge Dredd Megazine, but that series is not remembered with particular fondness. As with Anderson’s series at the time, she was portrayed as a drippy, passive character, mournfully observing how wicked and authoritarian the judges are, whilst doing even less about it than Anderson (and even Dredd). It is a shame that during the early 90s, the stock response to giving a female character her own series was to throw in some politically correct, feminising (as opposed to feminist) tropes which quickly sap the character of any verve whatsoever. Frankly, going the full cheesecake route would have at least been more entertaining.

Nevertheless, she survived that and went on to become, in Dredd’s view, the best Chief Judge he had ever served under.

Hershey appears as a major character in the 1995 Judge Dredd motion picture, played by Diane Lane (Barbara Hershey was presumably unavailable). Shorn of her distinctive bob, the character commits the egregious sin of kissing Stallone’s Dredd at the end of the film.

H is also for… 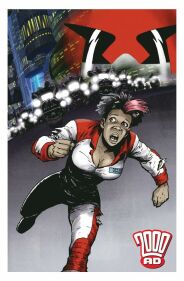 After Garth Ennis’ not so successful first shot as a regular writer of Judge Dredd, this was his second chance. A tale of parallel universes, drawn by Carlos Ezquerra and with Ennis fresh from the triumph of his Preacher series, this seemed to have the makings of an instant classic.

Sadly however, it failed on pretty much every front. The story itself was pretty insipid, most of the appearances by characters from other 2000AD stories felt shoehorned in and amounted to little more than walk-on parts, it was simply too fannish – a bit like Doctor Who at its worst when all the Doctor Who monsters team up and appear for seconds each onscreen (yes, The Pandorica Opens, I’m looking at you).

On the plus side, it did serve as Henry Flint’s first stab on a high profile project, when he filled in for Ezquerra who was having personal problems at the time. Flint has gone onto become a firmly established fan favourite.