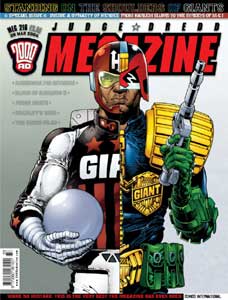 Three generations of Giants have appeared in the Dredd strip over the years. The first Judge Giant was a frequent sidekick of Dredd’s in the early years, helping him during The Day the Law Died (progs 89–108, 1978-1979) and dying in Block Mania (progs 236–244, 1982). While popular at the time, Giant somewhat dates the strip; it seems unlikely that they would introduce a black Judge these days who talked jive. His death was quite controversial – many fans quite naturally objected to one of their favourite characters being killed by being shot in the back.

Like Fargo, DeMarco and, one suspects, a pretty huge number of judges, Giant couldn’t abide by the “no sexual relations” rule of being a Judge (given the parallels with the Catholic church, it is surprising that no-one has yet decided to do a story about a Judge-Tutor abusing Cadets in the Academy of Law, but I digress). And so it was that just prior to Necropolis (progs 674–699, 1990), it emerged that Giant had secretly fathered a son (Young Giant, progs 651-655, 1989), who was swiftly inducted into the Academy of Law. Giant Jr performed a similar role in Necropolis to the one played by his father in The Day the Law Died. Soon after, Giant graduated from the Academy and went on to perform a similar role as Dredd’s sidekick in numerous stories.

I hope you’ll indulge me however, if I spend most of the rest of this article focusing on Giant Senior’s father, and Giant Junior’s grandfather, John “Giant” Clay. This character only appears once in the Dredd strip, although there was a one-off story called Whatever Happened to John “Giant” Clay (Judge Dredd Megazine issue 216, 2004)? He was better known as the star of the Harlem Heroes series (progs 1-27, 1977), one of the most popular strips in the first year of 2000AD. Indeed, since Harlem Heroes was published in prog 1, Giant actually predates Dredd by one week.

Harlem Heroes, named as a nod to the Harlem Globetrotters, focused around the futuristic sport of aeroball. As lost genre now, British comics in the 70s and 80s were full of sports stories, and this one followed the same basic formula (think Roy of the Rovers but with jetpacks). 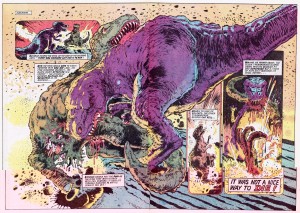 This explicit link between Judge Dredd and the Harlem Heroes was to be just one of several little cross references which were to appear in the Dredd strip over the years. Satanus, the black tyrannosaur which appeared in The Cursed Earth (progs 61–85, 1978) was cloned Jurassic Park style from the DNA of the son of Old One Eye, the tyrannosaur which was the main antagonist in Flesh! (progs 1-19, 1977); just to be confusing, his own son Golgotha then appeared in the ABC Warriors in a story which was technically set several decades before Dredd was even born (ABC Warriors: Golgotha, progs 134 to 136, 1979). ABC Warriors itself was set initially during the fag end of the Volgan War, which first appeared in the 2000AD story Invasion. The Kleggs, alien mercenaries who appeared in The Day the Law Died, were to appear in the first Ace Trucking Co story (The Kleggs, progs 232-236, 1981). And finally, there have been two stories in which Dredd either fights or teams up with Johnny Alpha from Strontium Dog, a series which is set in the late 22nd century (Dredd is set in the early 22nd century).

As time has gone on however, enthusiasm for the idea of a shared 2000AD universe akin to the Marvel or DC universe, appears to have waned. Origins (progs 1505–1519 & 1529–1535, 2006-2007) makes no reference to the Volgan War for instance. A number of series have appeared subsequently which have been explicitly set in Dredd’s world, mostly in the Judge Dredd Megazine, but the more tenuously linked strips have tended to go their separate ways in recent years, although Pat Mills has actually been drawing his own creations Invasion and the ABC Warriors even closer together, with Invasion’s follow-up Savage telling the origins of the ABC Warriors and its predecessor series Ro-Busters.

Where there have been crossovers in recent years, they have tended to take the form of alternate versions. The 1995 Judge Dredd film featured an “ABC Warrior” which looked remarkably like Hammerstein from the ABC Warriors. As a tie-in, Pat Mills wrote Hammerstein (progs 960-963, 1995), which ret-conned the robot into being one of the wardroids used by President Booth to fight the judges at the end of the Atomic Wars. That story has since been contradicted by the ABC Warriors series, which establishes the Volgan War continuing for decades longer than would work in Dredd’s continuity. 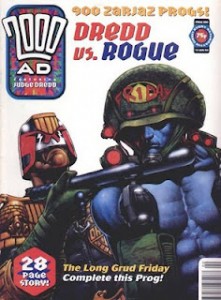 A year previously, 2000AD featured a crossover between Dredd and the Rogue Trooper (Casualties of War, prog 900, 1994), but this Rogue Trooper appears to be an amalgam of both the original Rogue Trooper and the reboot version “Friday” (Rogue Trooper continuity is a whole other kettle of fish I won’t go into here).

And finally, in the story Helter Skelter (progs 1250–1261, 2000), Dredd faces his own Crisis on Multiple Earths and encounters several different 2000AD characters, as well as judges from another parallel universe.

It probably made sense to decouple all these series from each other; the longer they went on the more of a straitjacket it would become. From a fan’s perspective however it is a bit of a shame as it was fun trying to piece it all together. Judge Giant then is a sort of artefact from a bygone era.
Highlights include:

G is also for…

Without Alan Grant, it is entirely likely that Judge Dredd would have fizzled out years before its greatest stories had been told. Grant teamed up with Wagner at a crucial time during the latter’s writing of the Judge Child saga. Grant helped him get past his writer’s block and the two formed a writing team which lasted for the best part of a decade.

Most of what is regarded as the golden age of Judge Dredd was written by Wagner and Grant (or T. B. Grover as they typically wrote under). Combined with artist Ron Smith (another unsung hero), they produced a consistent, funny and imaginative body of work at a level of quality that the series struggled to reach both before and afterwards.

And of course they did this while writing numerous other titles at the same time, including Strontium Dog, Ace Trucking Co, Robo-Hunter and many other series which appeared in the Eagle and Scream. Their run on Batman remains one of my favourites (as is Alan Grant’s solo run); in particular, in the Ventriloquist they created a quintessential Bat villain.

Without Alan Grant’s no-nonsense approach, John Wagner’s style has developed to become much more introspective and meandering. In general, it is a style that I love, but that isn’t to say that the occasional jolt of Alan Grant-style anarchism wouldn’t be unappreciated to keep things more on track. An Alan Grant co-written Day of Chaos for instance would probably have ended in half the time (although I think even he would have baulked at going further than wiping out 87 per cent of the population).

I don’t agree with everything he has done, or wanted to do, with Judge Dredd and Anderson, Psi Division (not to mention killing off Johnny Alpha in Strontium Dog), but he remains one of the British comic industry’s greatest ideas men and I would like to see him writing a lot more than he does these days.