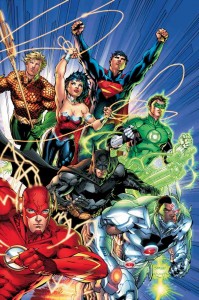 The news that DC will be rebooting its entire superhero line with issue 1s from September has been whizzing through my mind all week. It’s going to have profound ramifications, not just for the DC Universe but for the so-called comics ‘industry’ as a whole.

This promises to be DC’s biggest stab of the reset button since the start of the Silver Age. The Crisis on Infinite Earths resulted in a number of titles going back to basics, most notably in the case of John Byrne’s Superman, but for most of the line it was little more than a hump in the road.

Zero Hour and its Issue Zeroes promised much but ended up being a damp squib. The Infinite Crisis and One Year Later was far better handled but only really offered a jumping on point of existing storylines.

By contrast, the post-Flashpoint DC Universe looks like it may end up more closely resembling the Ultimate Marvel line – and the launch of that line didn’t result in the existing Marvel Universe cancelling at the same time.

Personally speaking, it feels a little too soon. According to Dan Didio’s introduction to the collected Infinite Crisis, Julius Schwartz told him that all comics lines need to refresh themselves every 10 years or so and that sounds about right.  Certainly, DC left it too long last time. On the other hand, ending the current continuity on a high is arguably no bad thing.

And, thinking about it, the series I have enjoyed do appear to be coming to a close. Geoff Johns’ complex ‘Corps Wars’ storyline has pretty much run its course. Very few mysteries remain. Grant Morrison’s Batman run similarly seems to be running out of road; he’s done a good job at answering the question: where do you go after bringing Batman back from a timespanning cosmic odyssey, but does Batman Incorporated really have more than half a dozen issues’ worth of storyline to go?

Better this I suppose than what happened to Superman post-Reign when, having run out of story to tell the strip ended up just recycling plotlines from Lois and Clark and, a little later, Smallville. The setting that John Byrne had established was quite radical in its own way but it ended up collapsing under the weight of its own self-imposed restrictions.

More broadly, the same could be said of the post-Crisis on Infinite Earths DC Universe. They had established for themselves a clear set of rules on time travel and parallel universes all of which fell apart quite quickly for the simple reason that this is a line of superhero comics and they were attempting to tell them with an arm tied behind their back. One hopes that they won’t repeat this mistake with the latest reboot. Somehow I doubt they will (they’ll make all new mistakes) and the fact that they are launching with 52 new number ones may be a clue. I doubt they would be as radical as to set each of the new first issues on a different one of DC’s alternative Earths, but neither do I see them scrapping the multiverse any time soon.

The crucial question though is to what extent the new “main” Earth resembles the current “New” Earth (are you lost yet?). The real problem isn’t so much the main guys: Superman, Batman, Wonder Woman et al won’t be going anywhere. But what of the sidekicks? Specifically, what happens to Robin? Will Dick Grayson be donning the green tights again? Since he grew up and became Nightwing (let alone Batman), we’ve had Jason Todd, Tim Drake, Stephanie Brown and now Damian Wayne.

All this is of fascination to the plans but does rather highlight why it all needs paring down. Something tells me that the current Dick and Damian Batman and Robin won’t be making the cut, which is a shame because they’ve been fun. I’m sure many more fans out there feel a lot more strongly about it than me.

But is it worth getting that energised about? One thing that comic fans don’t appear to have noticed is that just because a character or plotline becomes out of continuity, it doesn’t mean that the comic itself suddenly disappears – plenty of wives and mothers will testify to this fact. The Dark Knight Returns and All Star Superman weren’t any weaker because they were out of continuity.

Regardless of its official status, only real way to understand DC continuity – and comics continuity more generally is Hypertime. I’m quite confident that Damian will be back sooner or later, just as I’m entirely unsurprised that DC are currently publishing a Batman Beyond comic 9 years after that animated series ended.

The final question is: will I stick along for the ride? The risk with jumping on points is that they serve as terrific jumping off points as well. That was certainly the case for me with Zero Hour. Can I really face going through it all over again or should I, as a 36 year old, really use this as a convenient point to move on?

Clearly it depends on what exactly DC have to offer. I’ve become a bit of a fan of Geoff Johns’ work and the creative way in which he manages to weave old and new together, so that is a real plus point for me, so I’m currently inclined to pick up the books with his name attached. Beyond that, I don’t know.

I am however extremely inclined to stop buying the floppies, in favour of going entirely digital. DC’s decision to simultaneously publish online has the potential to be the real game changer here, and that’s what makes this reboot more significant than anything else.

I’ve been reading an increasing amount of my comics online over the past year-and-a-bit and despite the fact that I’ve been reading it all on a non-HD iPod Touch, I have to say I’m a convert. Up until that point I had associated online comics with sitting at my desktop; comics were the things I wanted to read when I wasn’t at my desk. It was clear from the word go however that the iPad was going to change this completely: in terms of both size and function, the thing seems tailor-made for comic reading (far more so than reading prose, which the Kindle does much better).

DC have been experimenting with same-day-as-print since they went onto Comixology, and it would appear that they have been happy with the results. I’d like to be able to reassure Gosh! Comics that I won’t be ditching them to embrace digital, but I can’t. Not only is it more convenient, but it means I can keep my collection in my back pocket rather than in an ever growing pile of boxes in my bedroom.

That doesn’t mean I’m giving up on physical comics entirely. I could never abandon my 2000AD sub and there’s nothing better than a thoughfully produced collection. I took the radical decision of buying all the Starman Omnibuses rather than read them digitally for the simple reason that they look gorgeous. The best stuff that I read online, I will no doubt end up buying an all-the-trimmings physical copy of.

With that said, and here’s the rub, I’ll be doing most of that purchasing online where the prices are typically quite dramatically cheaper. So the question remains: what is to become of shops like Gosh? In the short term, there will still be plenty of things for me to buy there but I can’t see myself continuing in five years time. I feel guilty even writing this, but I’d be lying if I claimed I’d stay loyal. Signings have very little appeal to me. Talks, maybe? I hope they’ll figure something out, but at the end of the day, a comic shop isn’t like a village post-office. There aren’t any obvious pro-social externalities worth hanging onto here and it is a type of business that didn’t even exist 30 years ago.

All in all, then, September 2011 will mark the passing of one age and the start of a new one. Whether this new era is a bright, exciting and happy one remains to be seen.