I’ve just watched an extraordinary film on this evening’s Newsnight about a by-election candidate in Japan. He basically spends the entire campaign – which he has to pay for entirely out of his own pocket – being abused by his Sensei (basically, the party elders), having his wife told she should give up her career and become his trophy housewife and generally being treated like dirt. In one particularly spectacular act of petty bullying, they don’t even permit him to meet Junichiro Koizumi who has come to help his campaign.

It’s quite clear that the feudal mind-set is still alive and well in Japanese politics, even if the economic system has moved on. And however problematic our own system of politics is, at least it isn’t quite the pantomime of casual abuse that we see in this film.

But there are now also questions over the fate of the Liberal Democrat leader, Sir Ming Campbell, 66, who has failed to push up his party’s fortunes in the opinion polls in recent months. He was chosen in 2006 to provide a safe pair of hands after Charles Kennedy had to resign – but he also has younger MPs who are keen to take the job.

As Brown has now hinted that there will not be an election until 2009, it raises the question of whether the party will want to give itself a fresher look by bringing in a younger leader such as home affairs spokesman Nick Clegg or environment spokesman Chris Huhne.

One Lib Dem MP said last night: ‘This election decision is going to have big ramifications for us all. We will have to take a good hard look at our own party, now the prospect of an autumn poll has receded, to think about where we want to be in 18 months’ time.’

This is spurious on several grounds. If there are younger MPs who are “keen” to take the job, they should be named, surely? Or is that merely speculation? It is also not clear how Brown not calling an election until 2009 “raises the question of whether the party will want to give itself a fresher look by bringing in a younger leader”. How does it, any more than, for example, it raise the question of whether the Conservatives might not want a less posh leader, or that Labour might not want a less Scottish leader? Who is raising this question, apart from the journalist herself?

Finally, the quote – which is clearly being used to back up these statements – is a non-sequitor as it does not in fact call for Ming Campbell to be replaced.

I have no objection to commentators arguing for Ming Campbell to be replaced, but this article is presented as news. What it is, in fact, is opinion, and one in which the agenda is entirely unclear. If Ms Revill has anonymous briefers saying that the knives are out for Sir Menzies, she does not say so. It is one thing to protect the anonymity of briefers, quite another to present it as anything other than briefing.

Is it really too much to not expect journalists to editorialise in this way? I request a clarification over what exactly Ms Revill has been told and what the Observer’s policy is regarding reporting news dispassionately.

I’ve been terribly uninspired about what to write about on this blog recently. What more is there to say about Gordon’s brown trouser moment? I’m dreadfully bored of it to tell you the truth.

The one thing that has interested me is that the narrative that is emerging is that Cameron has emerged from this in a strong position, with Gideon Osborne’s tax announcements being hailed as genius. This does rather smack of the same self-delusion and hubris that felled Brown. The only thing the Tories achieved last week was to squeak about a couple of modest policy announcements and to avoid a meltdown. The former is, admittedly, not something we have heard from them in literally years while the latter was a remarkable turn of events given the last 15 years, but what seems to be getting forgotten is that their current standing in the polls is no less a post-conference bounce than Labour’s was last week.

Something tells me that they’ll be back to their fun and games in no time. Jim Knight’s announcement about Grammar School ballots is calculated to engineer a Tory split. Perhaps it is too calculating and will thus fail to launch, but it is based on a sound premise: the Tory capacity for internecine warfare over minor issues is without limit. Sooner or later they will bite, and the party itself has already asserted its dominance over its weak and vacillating leader. Expect a few more lurches to the right over the next few months.

Anyway, blah blah blah, you’ve heard it all before no doubt. Apols for being so boring. But really, have you seen the material I’ve got to work with here? Good grief! I’m out of ideas – if you want me to blog about something, make a suggestion in the comments. Otherwise, all you’ll be getting is reviews of Buffy comics and 2000AD. You have been warned. Ta. 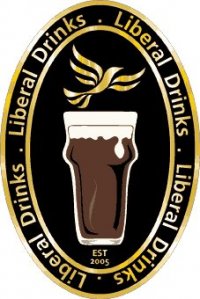 What a difference a weekend makes. This time last week I was contemplating canceling the October Westminster Liberal Drinks – didn’t seem much point if the election was happening. It would have been a shame given that we hadn’t had one in September due to a clash with conference, July due to the clash with the Ealing Southall by-election and August due to, um, me not bothering to organise it (only to get half a dozen calls of people wondering what was happening – sorry).

Now it is well and truly back on – 17 October – RSVP via Facebook.

What’s more, it looks like we’re going to have more across the UK than we have ever had this month. Looks like the idea is finally beginning to take off. Again, you can express your interest by joining our Facebook Group.

…time for me to give the Drinks website an overhaul, methinks.