An interesting twist on the recent announcement by Colin Challen that he won’t be restanding in Morley and Rothwell, in order to spend more time with his vegetables. I understand from a reliable source that he is incredibly bitter about what he perceives to be a dirty tricks campaign waged by Balls’ team over the past few weeks, which hit fever pitch when rumours began circulating (helpfully boosted by secret Balls admirer Guido Fawkes) that he had made up stories about him falling off his bike.

My bid to raise funds for Ed Balls’ sex change operation failed late last year. Fortunately for him, all women shortlists are at the discretion of the Labour NEC which judiciously (ab)uses them to help the “right” sort of candidate such as Balls, and exclude the “wrong” candidates such as Peter Law. Is it any wonder why people are so cynical about them?

I thought this was an interesting illustration of how lazy journalism can distort the news to a dangerous degree.

The Hansard Society – whose stated aim is to “promote effective parliamentary democracy” – spoke to 81 Labour MPs, 55 Conservatives, 19 Liberal Democrats and five from other parties.

It found that 22% of MPs were contacted by interest groups at least 50 times a week and 59% at least 20 times.

Some 51% said they were lobbied at least 20 times a week by charities and 39% by businesses.

Meanwhile, 31% received this many approaches from public sector organisations and 22% from trade associations.

Adding all these figures together meant some politicians were being approached more than 100 times a week in total, the report said.

This is refracted in the first paragraph to:

Some MPs are being approached by lobbyists at least 100 times a week, a report by the Hansard Society says.

Which in turn is refracted into the headline as:

Most people will only read the headline or, at best, the first couple of paragraphs, leading to a completely distorted view of what Hansard’s research actually says.

More opinionpollballs in the Guardian today. Apparently, the Great British Public wants MPs to do a statutory 7 hours a week for chariddy.

If I ever acquire a John Hemming-style fortune, I’m going to entertain myself by commissioning banal opinion polls. For example, one thing I’m dying to know is whether the British public prefers kittens that are ‘hideous’, ‘ok-looking’, ‘quite cute’ or ‘very cute’.

In all seriousness, this poll is indicative of exactly the sort of mindless anti-politics that is all too pervasive in modern Britain. If every MP in the country did do 7 hours voluntary service each week, the first thing people would complain about is why they are no longer working 50-60 hours a week representing their constituents. It’s based on a complete ignorance of what MPs do and is designed to take a potshot rather than actually inform debate.

Most MPs I know in fact take it for granted that they should work on a variety of charitable and community-based projects. But charity fun-runs are no substitute for scrutinising legislation and holding government to account.

Frankly, I think we’ve already gone too far in terms of turning MPs into mobile Citizens Advice Bureaus and case-worker-extraordinaires. Apart from anything else, I suspect it is one of the main reasons why MPs have been so poor at blocking centralisation. If you devolve too much power, then the ability of MPs to manfully jump in and solve all their constituents’ problems would be severely limited. Instead, people would pay more attention further down the foodchain, something which would help both local politics and service delivery.

Throughout the debate on party funding in recent months, one of the most oft-cited arguments is that political parties already get public funding via their expenses allowances. Personally, I’m coming around to the conclusion that this is one of the more pernicious forms of state support, responsible for both distracting MPs away from their real job and undermining other politicians further down the foodchain. Other forms of party funding, in my view, would be far less pernicious (although I notice a lot of opponents of increased party funding are all for the status quo).

William Huskisson MP, the first person to be killed by a steam locomotive (the Rocket no less), was friends with Thomas Hare, the inventor of the single transferable voting system, who only narrowly escaped death seconds before.

I don’t have a particular brief for the Police, nor do I think that Ruth Turner is a hardened criminal or particularly corrupt (if she is charged, it is to take the wrap for her bosses). But I really can’t understand why Labour politicians are getting their knickers in such a twist over her 6.30am arrest on Friday.

Firstly, this is the party that likes to go on and on about how it is “tough on crime” and how the police should send signals to criminals. The police are just carrying out government policy. Secondly, this is a member of Downing Street staff. I would be surprised if she didn’t get up at the crack of dawn each morning to go to work.

The alternative, as the Guardian suggested on Saturday, would have been to arrest her at her place of work. Yet, you can absolutely guarantee that if the police had done so, exactly the same people would have protested at the “theatrics” of arresting someone at Number 10. The policy are damned if they do and damned if they don’t.

You can’t help but suspect that this is a “some animals are more equal than others” moment, coming at the end of a regime that has become so utterly corrupted by the trappings of power that even when they are caught with their hands in the till, the expect to be treated with complete deference. 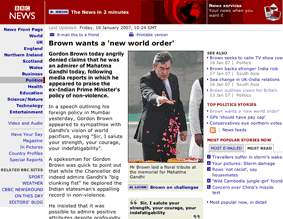 This is a bit of a shock, although perhaps a bit understandable given his recent fatherhood. Matthew’s career showed a lot of early promise but he somehow never fulfilled it. Being stripped of his position as Chair of the Parliamentary Party in 2005 must have been a bit of a blow and Mark Oaten’s experiece may have made him think twice about continuing a Parliamentary career.

But the fact remains that a whole political generation is either leaving Parliament or has been otherwise compromised in the past twelve months. Of course there is Oaten and Charles Kennedy, but Paul Keetch announced his resignation a couple of months ago and Richard Allen left before the last election. Oh, and then there is whatever the hell is going on with Lembit. That leaves quite a few MPs aged between 40 and 50, but only Nick Clegg (who turned 40 last week) and David Laws are generally regarded as “rising stars”.

It may well be that the “rising star” label itself is a poisoned chalice, if you will permit me to mix my metaphors for a minute. Anyone found with one about their person seems doomed to failure.