I’d forgotten about Stars in their Hats… 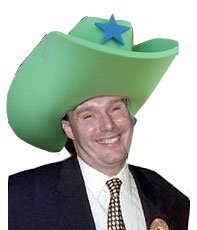 So far, Oaten is the only Lib Dem candidate in this race. Bizarrely though, he may find he has come competition from his campaign manager.

I have to admit to having some sympathy for Zoe Williams’ argument here that the other Big Brother contestant commonly known as Maggot should be allowed a platform for his political views on BB. What’s the point of having him on otherwise?

True, broadcasting must be politically unbiased, but there is a simple solution there. Simply allow politicians from across the political spectrum equal airtime on the programme to put across their reaction.

At some point in the next General Election campaign, Dave is going to have to start being nasty about the Lib Dems. Yet, he has spent the last few weeks borrowing so many of our clothes, how on earth is he going to convince people that we have the wrong policies?

This latest article on crime is an excellent example. The Tories love to tell people how soft the Lib Dems are on crime; it’s their bread and butter. But we are now drawing together a tasty pile of quotes from Cameron himself that will make that next to impossible next time.

The Tories stopped the “decapitation” strategy last time by strict targeting of just a handful of seats around the country. Next time they will need to target more constituencies and yet will struggle to put clear blue water between us.

While it frustrates me how Lib Dem MPs often make excellent constituency caseworkers at the expense of national heavyweight political figures, it does make them tough to dislodge. I can see Cameron doing very well in the air war against us on current form, the progress the Tories made in 2005 in ground war campaigning looks to be squandered.

It really is looking better all the time.

Is it really wise for the Oaten camp to come up with this?

Ming has not been a well man. Leading the third party is an enormous strain. You don’t have the back-up that the two main parties enjoy.

Really? Why, then, did Mark believe that Kennedy was up for the job, despite his debilitating condition? If Oaten is going to make Campbell’s health an issue, then he has serious questions of judgement to answer himself.

A remarkably nasty start to a campaign.

UPDATE: The Times speculates that Oaten is planning to pull out for Campbell at the last minute. Personally I can’t see it. He’s spent the past week burning all his bridges with Ming’s camp – if he doesn’t stand then his attacks will only help Simon Hughes in the end – and to do so would effectively render him a less serious political operator than John Hemming (no offence, John). As I said on Monday, he’s spent far too much time preparing for this moment to bottle out now.

Jonathan Calder wasn’t very impressed, and neither was I (no surprise there then). Why have all those people milling about in the background? Yes Mark Pursey, your mum can see you. If you’re going to do a Tory style launch, at least get them to flank you.

Oaten’s campaign manager Lembit Opik needs to pull his thumb out of… er… well, anyway. What I’m trying to say is, these two are playing on their PR credentials, and on that basis neither of the other candidates have much to fear.

Also, though I’m hardly a Leah Darbyshire myself, and it may seem a little harsh to say, but if you’re going to put so much stock in your candidate having youthful vigour, you need to do something about his head which, to be frank, resembles a recently unearthed root vegetable. Botox the mofo if you have to. That may be impolite to point out, but then so was the constant innuendo about Campbell’s age that peppered his speech. You reap what you sow.

In the papers on Tuesday, there was also some kite-flying about Oaten proposing to change the Lib Dem policy of raising income tax to 50% on incomes over Â£100,000 by raising the threshold to Â£150,000. I’m afraid this sums up, for me, the whole problem with Oaten. There is not a single principled position and its diametric opposite that he has not placed himself between. He has triangulation in his blood; it’s what he does. That’s how a Social Democrat can simultaneously claim to be a One Nation Conservative (he founded the Peel Group on the grounds that the Lib Dems were the natural party for wet Tories) and a Liberal To Rule Them All.

Personally, my support of the supertax policy is fairly weak. I agree with the argument that we can’t depend on it raising quite as much as we predict, and that the truly rich will simply avoid paying it. Indeed, I have to admit that some of the better arguments made in the comments of this blog have given me real pause for thought. I support it mainly on the basis that I don’t believe that the more apocalyptic predictions made about it are true, and on the basis that I can’t see the party adopting something that I would consider to be genuinely progressive, i.e. a proper LVT policy.

I would have some sympathy therefore if he had come out and simply called for it to be abolished. But this wishy-washy fudge is simple nonsense. What is he saying? That people who earn Â£120,000 a year deserve a break, but people on Â£155,000 can screw themselves? It neither satisfies the people who see it as sending the wrong signal, nor the people who believe it is the right policy. It is empty-headed, rush-to-the-centre-of-any-argument nonsense. And it is exactly where the party should not be going.

To whom it may concern: I’m afraid I don’t accept anonymous comments on this site. Thin end of the wedge. Include a name, or at least a pseudonym. And a genuine (or genuine looking) email address.

Peter and Dan Snow’s Whose Land is it Anyway? was a treat: a whirlwind tour around the issues surrounding land ownership in the UK today. And Kevin Cahill, mentioned yesterday, did get a “special consultant” credit in the titles (as well as a brief appearance).

Several key points were of interest: the landed gentry from feudal times continues to own a huge chunk of Britain, subsidised through the taxpayer’s nose; that there has been a notable drift with many of the oldest landowners, including the church, selling off rural land to purchase more profitable urban land; that the leasehold reforms in the 90s has produced a churn effect, enabling individuals to buy their lease, but this is doing nothing to increase supply and is simply carving up large estates into smaller holdings; that one of the best ways to see your property values shoot up is to have a film star move in around the corner.

Much food for thought, not least of all whether it really makes sense for Britain to be so rural given the population pressures. Having taken a greater interest in rural issues over the past half decade, what has struck me is how village life is being threatened by restrictive planning regulations primarily, which restrict the supply of housing and force locals to be replaced by commuters and retired people.

But to a degree, there is a danger that it could have slightly misled viewers into thinking that the issue is how much land by geographical area is in private hands, rather than value. When I talk about neo-feudalism, my problem isn’t Madonna buying a country pile, it is speculators holding urban dwellers to ransom. The buy to let phenomenon is a boom industry at the moment, but what will happen to the next generation 20 years down the line when even that market has closed to them. I really don’t think I’m exaggerating when I say that without reform we could be looking at a whole underclass of essentially serfs; people with no assets and no prospect of gaining them. Their landlords may be Mr and Mrs Bloggs rather than the Duke and Duchess of Bloggshire, but the fundamental economics and social injustice of 500 years ago will be very real.

I’m not convinced we’ll ever get that far as the resultant problems of social dismobility and unrest will emerge long before it gets too ingrained, but that in itself points to a tricky economic future.